Inter-Oceanic Canal in Nicaragua, a Great Work of Engineering 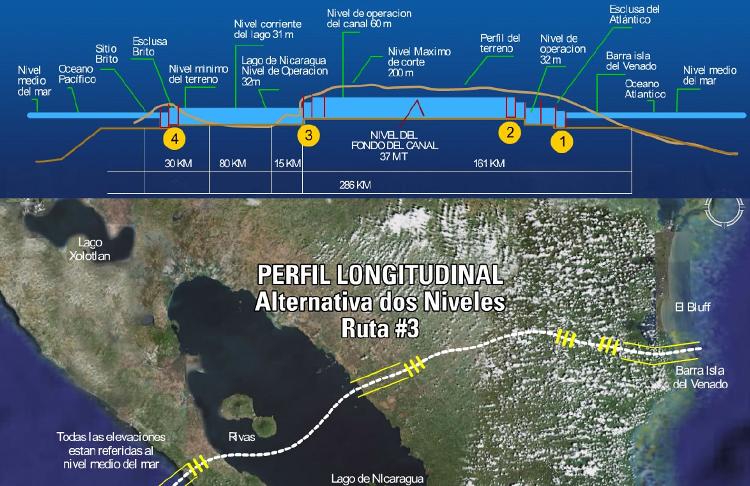 (TODAY NICARAGUA) The start of the construction of the Grand Inter-Oceanic Canal in Nicaragua and the works attached to it, in late current year, is seen as a challenge to engineering.

Today, around 400 professionals from different countries: geologists, engineers, environment and trade specialists and technicians, are involved in feasibility studies carried out prior to construction of the passage linking the Atlantic and Pacific oceans.

The president of the Grand Inter-Oceanic Canal Authority, Manuel Coronel, explained that the initial stage is estimated at around one million men needed to work on the implementation of the mega project.

It will not be easy since it is necessary to build a pipeline crossing the country, a deep-water port on each coast, a dry canal, a loading railroad, new international airports and free trade zones.

Although the details of the routes to follow and the way the work is going to be implemented are not known yet (they will be announced in mid-2014), it is known that the waterway will facilitate the passage of large vessels such as Postpanamax, which can not move today by the Panama Canal.

It will not be easy to carry out such a promising project. The executive believes that the work will take about a decade and will require about 40 billion dollars.

Not the first time that Nicaragua aims to build a canal. During the 19th and 20th century, the idea was considered several times and the United States was seriously intended to carry out the work.

Everything changed when Americans acquired the abandoned French project of a canal through the Isthmus and set aside this target in Nicaragua.

However, today it is vital to build a second channel for global trade, said on its website HKND Group, a concessionaire company of the project.

Specialists from the Department of Logistics and Maritime Studies of the Hong Kong Polytechnic University, who considered that the Grand Canal is strategic to the development of world trade, especially to Asia and America agreed with this idea.

This investigation came to the conclusion that through this inter-oceanic waterway trade could be greater and cheaper in cost of the voyage, while it recommended separating traffic of the different types of ships, in order to increase efficiency and improve sea safety.

The Grand Canal will strengthen the connection between the Middle East and South American East Coast, added the study.

For Nicaragua the impact will be considerable. Analysts calculate that the gross domestic product of Nicaragua will double in the coming years, and exports will record an increase, opening the door to the economic independence of the nation.

Undoubtedly, this huge engineering work is an investment that could well leave large benefits to the country and the region.

QCOSTARICA - Today, Monday, June 21, is the day of the year when the sun stays the longest on the horizon, therefore it is...
Rico's Digest