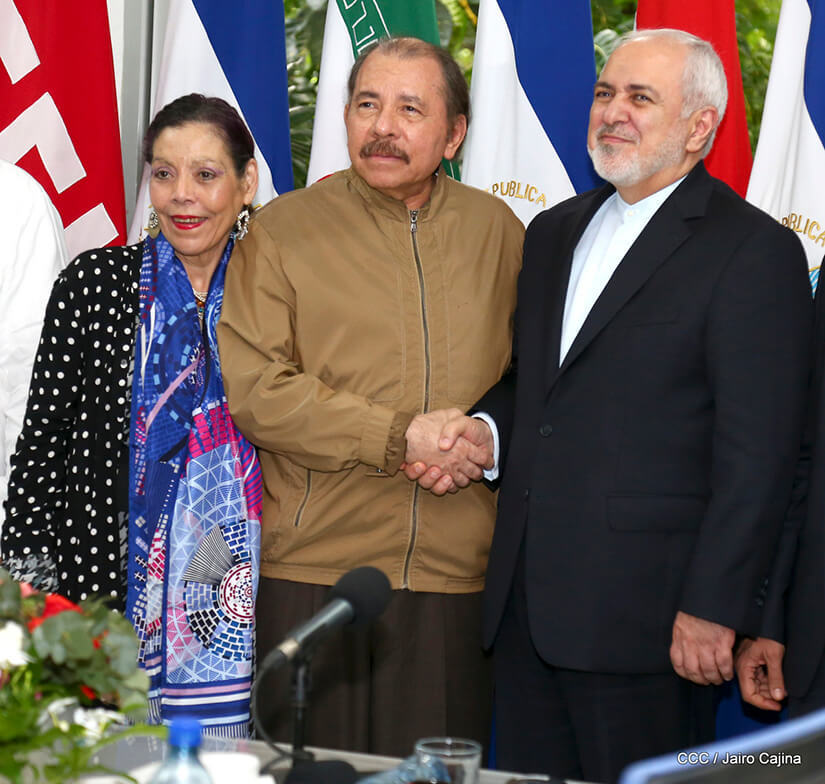 At a time when the United States and Iran maintain a tense relationship for the nuclear arms race of the Persian state, Daniel Ortega’s regime strengthened its relationship with the Ayatollah government, receiving Monday that country’s foreign minister, Mohammad Javad Zarif.

The Iranian minister was received by his Nicaraguan counterpart Denis Moncada and one of Ortega’s sons, Laureano (who has been sanctioned by the United States).

The presence of Laureano Ortega was in his capacity as “advisor for investments, trade and international cooperation”.

On Monday, Zarif had a meeting with Ortega officials at the Foreign Ministry, where he spoke of the common struggle against the “economic terrorism” of the United States, as reported by the official (State) media.

Strong tensions with the United States

Zarif’s visit comes at a time when the government of Iran, like officials of the Ortega regime, faces sanctions from the United States for violating the nuclear pact and advancing uranium enrichment.

The Donald Trump government withdrew from the nuclear agreement that the United States and the European Union had reached with Iran and since then tensions have only been increasing.

“We don’t have to allow them to put obstacles to the development of our peoples, of both of us, who are suffering from that economic terrorism imposed by the United States. The excessive use of the United States by the power of the dollar has meant that many countries are leaving aside the dollar (sic) in their business with other countries,” said the Iranian foreign minister.

More isolation from the United States

For former diplomat Julio Icaza Gallard, the relationship with Iran is nothing more than a message from Ortega to the United States, meaning: “The enemies of my enemies are my friends,” but he believes that Ortega is not measuring the international cost.

“With the approach to Iran, which is not new in its foreign policy, Ortega is getting between the legs of the elephants. The revenues from that relationship with the Ayatollahs for Nicaragua in the past have been very poor and Ortega knows that the help he can receive from the Iranians, today again confronted with the United States over the nuclear issue, is very limited, but he plays with the images: the enemies of my enemy are my friends,” said Icaza.

He also pointed out that the problem is that US relations with Iran can change at any time, as happened in the case of North Korea, “leaving him(Ortega) hanging.”

The former legislator and retired general, Hugo Torres, this relationship with Iran “has only served to try to irritate the United States,” because “Nicaragua has not received any commercial, scientific-technical, cultural or environmental benefits from the Iranians.”

Instead, Torres said that North America is still the main destination of Nicaraguan exports, the main attraction of tourists, the main investor in large hotels and hundreds of millions of dollars come from the United States, in remittances sent by Nicaraguan migrants.

Meeting with Ortega and his officials

The Iranian foreign minister met Monday afternoon with Ortega and his wife and vice-president Rosario Murillo. In the morning he met with the members of the Board of Directors of the National Assembly, as well as with the regime’s work team, among whom were the sanctioned Francisco López, treasurer of the ruling party, former president of the Nicaraguan Petroleum Company (Petronic) , and former vice president of Albanisa; the Minister of Finance and Public Credit, Iván Acosta; the Minister of Industry and Commerce, Orlando Solórzano; the president of the Central Bank, Ovidio Reyes, among others.

Iranian Foreign Minister Mohammad Javad Zarif said Monday that his country wants to establish “normal relations based on mutual respect” with Britain, in a message from Managua to Boris Johnson, on the eve of his probable inauguration as British Prime Minister.

“It is very important that Boris Johnson, at a time when he is about to enter 10 Downing Street, understands that Iran does not seek confrontation,” Zarif told a news conference in Managua, however, Iran keeps a freighter in Britain, which has generated tension between both countries.

QCOSTARICA - Most public institutions in Costa Rica do...
Trends