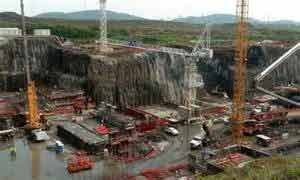 Salini Impregilo, a company belonging to the United Panama Canal Group (GUPC) consortium that is building the third group of locks in the inter-oceanic canal, has further complicated the crisis by asking for an advance of one billion USD, a demand that was immediately rejected by Panama.

The chief executive of the Italian Impregilo company, which along with GUPC lead Spanish company Sacyr Vallehermoso, Belgian Jan de Nul and Panamanian CUSA, presented the request from Rome while the consortium is in Panama negotiating a solution with canal management.

GUPC is asking for an extra payment of $1.6 billion USD for cost overruns in the work on the locks, holding Authorities of Panama Canal (ACP) responsible, something that ACP denies and which could lead to a halt to works this month.

The talks had previously progressed when an agreement was reached on resolving the consortium deficit by receiving an advance while the request is being negotiated, but Sacyr considered the $183-million amount offered by ACP to be too low and asked for $400 million USD.

The management denied that request, when suddenly to everyone’s surprise, Impregilo insisted that it one billion USD is needed to definitively resolve the situation, i.e; a $500-million USD advance instead of $400 million USD, with the claim to be handled by an arbitration court in Miami.

Jorge Luis Quijano, ACP manager, categorically rejected both requests from Impregilo, like previous requests from Sacyr, and reiterated the offer of $183 million USD, according to the terms expressed in the contract.

- Advertisement -
Paying the bills
Previous articleCalderón: Support For Movimiento Libertario Is Due To “Fears” Of A Possible Villata Win
Next articleEditorial- Drive Like Your Kids Live Here