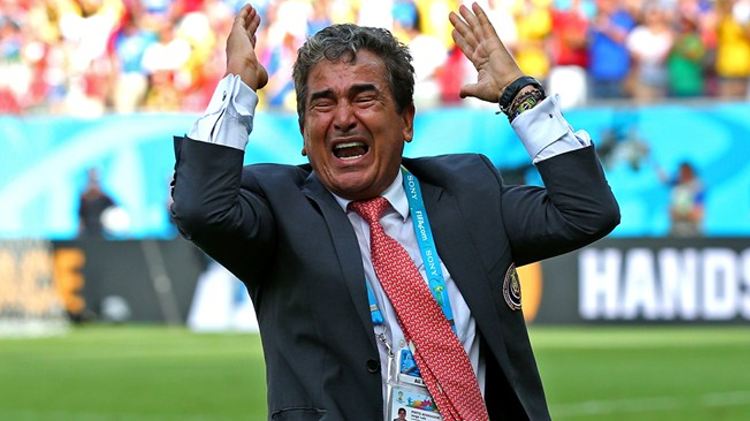 COSTA RICA NEWS – Before the entering the playing field, professor Jorge Luis Pinto asked his students to make history. After 90 minutes of play, the professor was made proud, his pupils had done the impossible, beat a four time world champion. And are on top of their group, advancing to the next round of play.

“Today (Friday) is the day, where we had to break history and we did it. The teams of 1990, 2002 and 2006 did a lot, but we wanted more, to make a change and believed we could do it and bit by bit, not all at once since Costa Rica has much, much more to give. I said it before, I have been analyzing Italy for the last 20 years and hoped to take advantage of it, thank God we could”, said Costa Rica’s coach Jorge Luis Pinto.

Costa Rica, whose only previous last 16 appearance was in 1990, are ranked only 28th in the world, 19 places behind Italy and 21 places behind Uruguay. But less than a week after a 3-1 come-from-behind win over Uruguay, Pinto’s team added another touch of magic to their impressive campaign so far with a deserved 1-0 win over four-time champions Italy.

“We’re delighted with the win, which has put us into the second round, but we don’t want to stop there. It’s only the start,” said Pinto, a 61-year-old Colombian known for winning league titles in Peru, Colombia, Costa Rica and Venezuela.

We tried to contain their play by restricting Andrea Pirlo. But we were also solid in defence.” Jorge Luis Pinto

The Colombian who has been at the helm of the Costa Rican team since 2011 said that the Ticos are not just content with their achievement so far, they want more and the next step is to beat England on Tuesday.

A win against England, a team that is badly in need of a win, will mean three consecutive wins for the Ticos. And against three world champions.

“The leader always has some advantage and if we can be on top we will do it, not easy against a tough team like England who has  not yet won a game”, said Pinto in Belo Horizonte, Brazil.

The coach said he was pleased at the performance of his players and for their “sticking to the script” to counter attack Italy in the midfield.

Pinto considers Bryan Ruiz’s goal in the 44th minute of the first half as opportune, when the Italian team couldn’t get one past goalie Keylor Navas.

In the seconds after the referree blew the whistle to the end the game, Pinto said he was stunned by the win.

“Many things went through my head, grateful to the Almighty, gratitude for all who have worked with us, the delivery and the attitude of the all the players. It is not easy to face a team like Italy, with its players, strucutre and ideology, for which we have to be frank about”, said Pinto with joy and satisfaction in his face.

Pinto says the results are from the hard work of the preseason, which he was criticized. “It worked, the team had a strong preseason…”, said Pinto.

In the end, the professor gives all the credit to his pupils for their sacrifice and dedication.

- Advertisement -
Paying the bills
Previous articleUSA Today: “5 things to know about Costa Rica”
Next articleA Hidden Village in Quepos Where The Colon or Dollar Are Not Welcomed