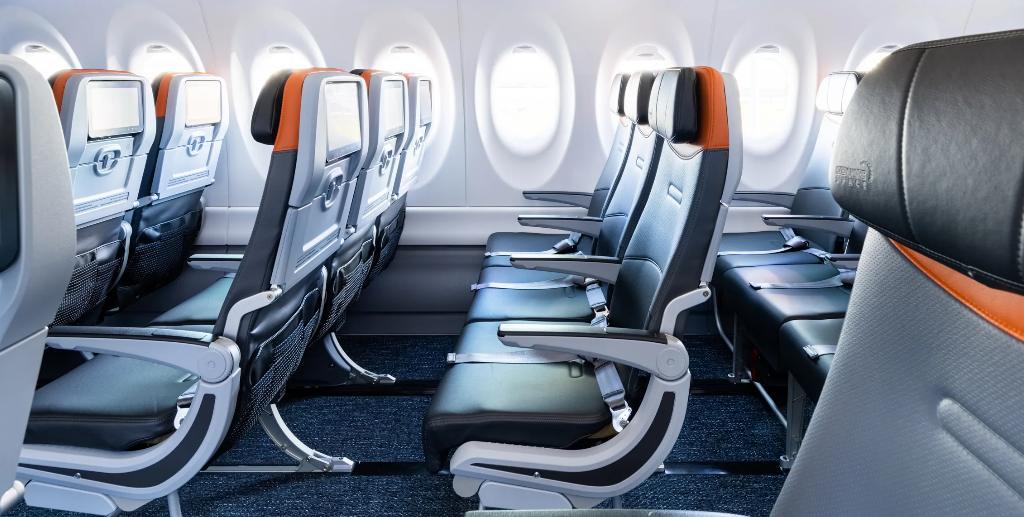 Q TRAVEL – JetBlue, the New York-based carrier, known for making flying in economy actually enjoyable, again, took a step forward in aviation with the premiere of its Airbus A220-300s, that is loaded with perks for budget fliers.

Condé Nast Traveler reported that the airline’s first Airbus A220-300 jet was delivered to its base at New York’s JFK at the end of December, and its interiors were unveiled on Tuesday.

One of the most notable things on board the single-aisle plane is fewer middle seats, arranged in a two-by-three configuration, meaning there’s less of a chance fliers will be caught in the dreaded middle spot.

The new seats are also larger, at nearly 19 inches wide – wider than any single-aisle aircraft, according to JetBlue, and the most spacious in the airline’s fleet. The airline also says it has specially contoured the back of each seat to allow fliers to have more knee space.

But it’s not just the seats that have been improved on the new plane. The overhead compartments and windows are larger, too, as is the bathroom, which is outfitted with a mosaic pattern from the New York subway.

The new aircraft will have its first flight in mid-June, on the Boston-Fort Lauderdale route.

JetBlue recently opened its route from Los Angeles (LAX), California, to the two international airports in Costa Rica, the Juan Santamaria (SJO), in San Jose, and the Daniel Oduber (LIR), in Liberia, Guanacaste.

The airline regularly flies to and from Costa Rica and Fort Lauderdale (FLL), Boston (BOS) and New York (JFK).

JetBlue says it has placed an order for 70 more of the -300 model, which is a precursor to the even larger -500 model that Airbus is building for launch in the next few years.

QCOSTARICA - In the second week of the new...
National