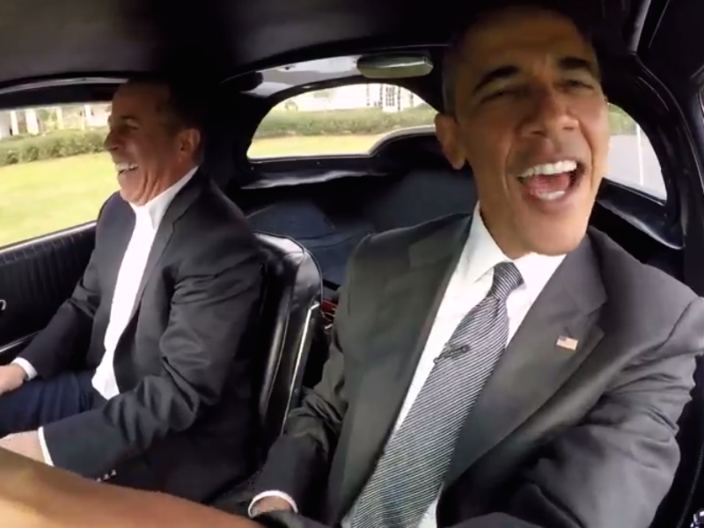 The show, as the name suggests, revolves around Seinfeld and his comedian friends driving in classic cars and making small talk over coffee.

While Obama is not a professional comedian, Seinfeld says the president “has gotten off just enough funny lines to qualify for getting on this show.”

Seinfeld greets the president at the White House in a silver blue 1963 Corvette Stingray.

“The coolest car, American made, for the coolest guy ever to hold this office,” Seinfeld tells the president.

Obama also shows off his presidential limousine, which he calls “The Beast” — “a Caddy basically on a tank frame.”

Later, while drinking coffee in the White House kitchen, Seinfeld and Obama discuss topics as varied as Obamacare, the president’s underwear drawer, and what it’s like to be famous. The president also has a great comparison of why politics is like football.

One of the funniest exchanges revolves around an in-depth breakdown of “Seinfeld” cocreator Larry David’s sunscreen habits. Obama reveals that he and David have golfed together before.

- Advertisement -
Paying the bills
Previous articleFirst Traffic Fatality of 2016 At 12:02am January 1
Next articleRun in a Zigzag if Chased by A Crocodile in Costa Rica. NOT.

Former Mexican President Allowed the CIA to Operate in Mexico

QCOSTARICA - For today, September 19, vehicles with EVEN...
Investing In Costa Rica