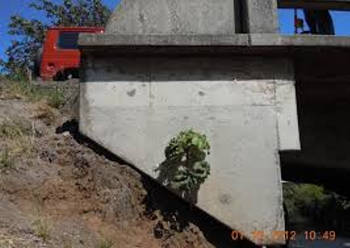 The materials and structures laboratory (Lanamme) of the University of Costa Rica (UCR) has invested half a million dollars in specialized equipment to measure soil quality at bridges and culverts of the Circunvalacion highway in the metropolitan area. 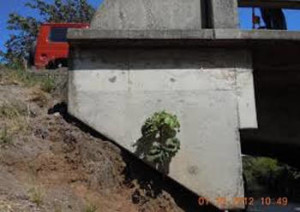 This comes a week after Minister of Public Works (MOPT) Pedro Castro journeyed up the hill to the Legislative Assembly to speak against a bill that would force the MOPT to take the recommendations of the Lanamme lab experts.

The bill comes in the wake of two cave-ins caused by the collapse of two culverts on the Circunvalacion in two succeeding years. But collapses came as a surprise to the Ministry due to a lack of vigilance and supervision, although companies had been contracted to maintain the surface of the road.

Lanamme is established by law as a consultant for highways but neither the highway agency Conavi or MOPT are obliged to take the advice of the experts. Recently, the lab warned of further collapses during heavy rains.

A UCR press release explained, “It is based on technology concentrated in fiber optics and other similar applications. Upon detecting risky behavior the equipment will send a signal to a cell phone to notify about the incident.”

Moreover, it will permit making an evaluation of the structure in cases like floods or an earthquake. Roy Barrantes of the evaluation section of the highway network infrastructure program said the lab has “substantial” capital to invest in existing technology that has proven useful in other parts of the world.

Meanwhile, MOPT is considering the bids of five companies to contract the repair of this year’s damage to the highway and to construct drainage to (the Ministry hopes) prevent another collapse like the one last year and the similar one this year.

Companies under consideration are Codocsa, MECO, Hernan Solis, Grupo JCB and the Guatemalan firm Marlin Tower. They are being studied on the bases of technical, legal, cost, finances, duration of work, and if the company intends to install a bridge or another culvert.

- Advertisement -
Paying the bills
Previous articleNicoya Continues To Be the County With Most Dengue, Despite Lower Number of Cases
Next article159 Earthquakes Shook Costa Rica in September