Lack of Road Markings, Fog and Landslides During Rainy Season Adds To The Dangers of Ruta 32

Being the most dangerous road in the country in the best of conditions, the Ruta 32 (San José – Limón) becomes even more dangerous due to lack of signage, pavement markings and poor illumination. Even more during the rainy season.

The worst of the worst is through the Braulio Carrillo national park, the area known as the Zurquí, where for more than 20 kilometres driving conditions get complicated due to weather with the constant mist all year round and fog and frequent landslides during the rainy season. 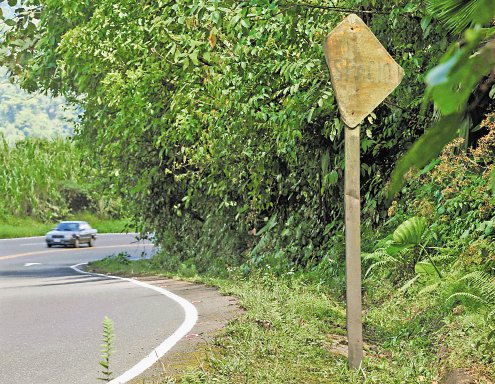 Even the most experienced driver, drivers who daily use the road, find driving the Ruta 32 a challenge.

“Our drivers travel the road once or twice daily, know well the road conditions, but sometimes the challenge is great. Small vehicles tailgate buses when the weather conditions get difficult to impossible to travel the Zurquí tunnel,” explains Henry Pescod, general manager of Caribeños, the company that provides regular daily bus service between San José and Limón.

The lack of security conditions make the road very dangerous. Pescod said that they keep their drivers constantly informed of problems on the road.

“The asphalt is terrible, full of potholes and on top of the rough road is the fog. Our drivers constantly inform over the radio of cars pulled over changing a tire due to bad road,” said Pescod.

The Ruta 32 is an all important road, carrying some 85% of all the country’s exports, according to Francisco Quirós Tencio,  Executive Director of the National Chamber of Cargo Carriers (CANATRAC).

Costa Rica has been negotiating with China for the financing and re-construction of the Ruta 32, a process that has seen postponements and political rhetoric taking priority over the lives of those who travel the route daily.

QCOSTARICA - What had been a good tool as a payment mechanism for sellers and businesses, the Ministry of Finance (Treasury) has in its...
Front Page