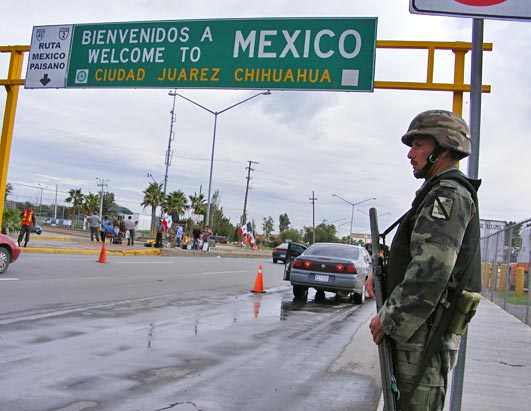 LATIN AMERICA NEWS – Many of Latin America’s border regions are historically neglected by the state and prone to all types of organized crime, from criminal gangs preying on migrants to the smuggling of drugs and contraband. Below, in no particular order, are InSight Crime‘s picks for five of the most dangerous border regions in Latin America.

For years, many of Mexico’s northern states were home to vicious battles between Mexican criminal groups fighting for control of drug trafficking routes into the United States. However, murder rates have plummeted in Ciudad Juarez, one of the major conflict areas. There’s several explanations for the drop in violence, including the defeat of the Juarez Cartel at the hands of their rivals, the Sinaloa Cartel.

The embattled state of Tamaulipas has also seen a significant drop in homicides since 2012, thanks to the weakening of criminal groups the Zetas and the Gulf Cartel. Nevertheless, violence continues in parts of northern Mexico, as factions of these once powerful drug trafficking organizations fight for control of valuable frontier territory.

While there is an overall lack of violence on the US side of the border, US border security forces have not been immune to the corrupting influence of drug trafficking groups.

One of the biggest contributors to insecurity along this shared frontier are Colombia’s neo-paramilitary groups, known as the BACRIM (from the Spanish acronym for “criminal bands”). The BACRIM are present in several Venezuelan border states, and are reportedly involved in kidnapping, extortion, and drug trafficking. The Rastrojos were once the most prominent BACRIM in this area, but have since been largely usurped by their rivals, the Urabeños. Ongoing fighting between the two groups has led to multiple massacres in the past year alone.

Colombian guerrilla group the FARC also maintains at least three fighting divisions on the Venezuelan side of the border region. States like Tachira, Apure, and Zuila are hubs for the FARC’s cross-border drug smuggling operations, as the rebel army faces less pressure from security forces in Venezuela. Colombia’s second-largest guerrilla group, the ELN, has also reportedly conducted kidnapping operations in Colombian border states like Arauca and Norte de Santander.

The presence of both guerrilla groups and the BACRIM has made this border region among the world’s most dangerous to visit, according to one recent ranking.

And thanks to Venezuelan economic policies, this border region is also known for its thriving contraband trade, involving a wide range of goods from Venezuelan state-subsidized gasoline to toothpaste. 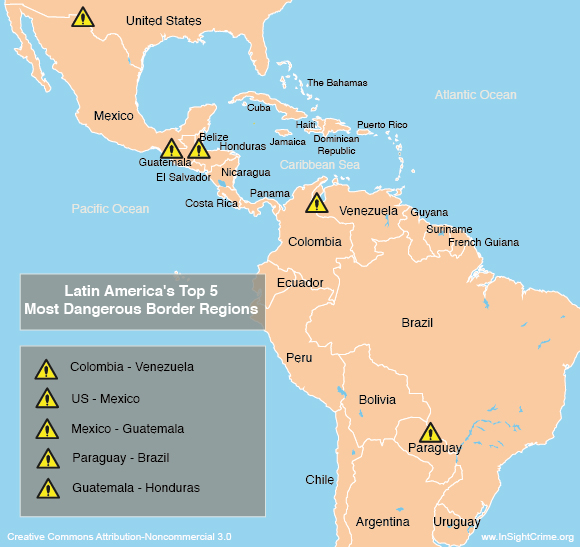 The Zetas have also been a major driver of violence along Mexico’s southern border with Guatemala. The Zetas first moved into Guatemala around 2007, and used extreme violence in order to seize control of drug trafficking routes — including the massacre of 27 people in 2011, reportedly in response to a stolen cocaine shipment.

However, the Zetas’ influence in this region has declined significantly, as many high-ranking commanders have either been killed or arrested in recent years. Nevertheless, drug-related violence in Guatemala’s northern Peten department indicates that other trafficking groups are willing to continue the brutality most associated with the Zetas.

With a reported homicide rate of 66.7 per 100,000, Paraguay’s border department of Amambay rivals homicide levels seen in Latin America’s most violent countries, like Honduras and El Salvador. This is particularly remarkable given Paraguay’s official 2014 murder rate reportedly stood at just 8 per 100,000.

Eastern Paraguay’s prolific drug trade is likely a contributing factor to this violence. Amambay is one of the principal marijuana-growing regions in Paraguay, which is South America’s biggest producer of the drug.

Brazilian drug trafficking groups have been based in eastern Paraguay for years. A spate of murders last year suggests their influence may be growing in the region. Some of these groups have reportedly paid off local government officials and police in order to receive protection. However, as indicated by the recent theft of a cocaine shipment by police in Amambay, there are some security officials who are taking on a more active role in the local drug trade.

Eastern Paraguay is also a key transit area for cocaine heading to Brazil, which boasts Latin America’s largest consumer market for the drug.

The majority of Guatemala’s violence is concentrated along its southeast border with Honduras. In 2013, the provinces of Zacapa and Chiquimula had murder rates more than double that of the national average, according to a report last year by think-tank the International Crisis Group (ICG). Meanwhile, in Honduras, the frontier departments Copan and Ocotepeque had an astounding aggregated homicide rate of over 100 per 100,000 in 2012.

The ICG credited this high rate of violence to an increased amount of drug trafficking through Central America and a higher amount of drugs being moved across the border by land, thanks to successful aerial interdiction efforts in Guatemala. The ICG report also noted that provinces on both side of the border suffer from high levels of poverty and demonstrate little respect for the rule of law.

QCOSTARICA - American Airlines announced that starting November 2, 2021, it will offer a direct flight between Austin, Texas and the Daniel Oduber International...
El Salvador

QCOSTARICA - Faced with wasting a vaccine dose when people in the priority groups scheduled do not show up, and a substitute cannot be...
Vaccine

QCOSTARICA - The Daniel Ortega government sent its ambassador to Costa Rica, Duilio Hernández, as its representative to the summit of Central American presidents...
Reports