Laura Chinchilla: “We’ve Had Setbacks, But Our Government Will Be Well Remembered” 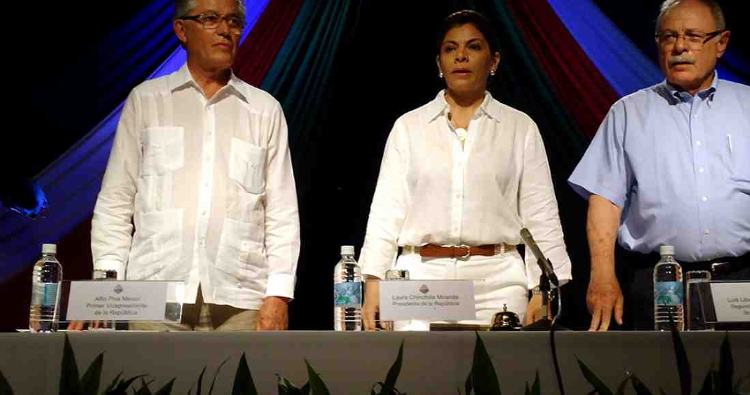 In addition, in the community hall more than 500 people attended to observe the rendering of accounts of Chinchilla’s cabinet as well as the four legislators of Guanacaste.

The president opened with words of gratitude to the community of Filadelfia and said, “We receive the government on the basis of three great challenges, the global crisis that affects Latin American countries, the crisis of public finances, which is a product of the large fiscal deficit, and the financial disaster of Costa Rican Social Security (CSSS).”

Later she acknowledged problems that have happened in her administration and talked about the poor perception of the population reflected in the polls. “Although it’s certain that we’ve had setbacks, we have face these challenges in a brave and decisive way,” she said, and added, “Our government will be remembered for our achivements and advances that we have left as a legacy to our nation.”

The president ended with the expression, “The annexation of Guanacaste teaches us that to reach our dreams, we have to annex ourselves and unite wills.”

“There are many ways in which they have wanted to measure use and one way has been the opinion surveys but I want to tell you that once again you have received us with joy and affection… This support, especially from the women, is what determines the government, not the surveys,” affirmed Chinchilla.

Carlos Cantillo, mayor of Ciudad Arqueológica, expressed his annoyance with the press and said, “Some communication media want to embarras our president and our government, and this isn’t fair because the press is a private business.”

Next, the different members of the cabinette were presented on the stage.

Pedro Castro, minister of MOPT, recalled that during the last year for Guanacaste “there has been an investment of $60 million, of which $40,000 were invested in the interamerican Cañas – Liberia northbound route.”

Leonardo Garnier highlighted the invesment in many educational centers in the region, for example Leonidas Briceño School in the amount of $1,600,000, the high school in Marbella of Santa Cruz with $904,000, the high school of Copal of Nicoya in the amount of $1,000,000, John F. Kennedy school in Liberia with $276,000 and the Technical Professional High School of La Fortuna of Bagaces with an investment of $220,000.

The president along with Mario Zamora, minister of Public Security, Pedro Castro of MOPT and Jose Luis Araya, official of Finance, signed an agreement that establishes a reform of the municipal regimen establishing a tax of $3.50 to foreigners who enter the country through the Daniel Oduber Airport in Liberia.

These funds will be destined to federations, confederations and municipalities of Guanacaste to use in county works.

In addition, Chinchilla came to an agreement with Marcos Jimenez, mayor of Nicoya, to change the time of the celebration of festivities in the Colonial City to 4 p.m. in the colonial plaza of Recaredo Briceño park.

- Advertisement -
Paying the bills
Previous articleBLOG: Another Holiday Out Of The Way!
Next articleUS Man Gets Prison for Operating Online Gambling in Costa Rica