Eduardo Cruickshank and Carlos Alvarado unveiled a criticized plaque commemorating the construction of the new home of the legislative branch of government, that the president called is the best representation of the people

The demonstrations generated disorder in the management of the activity, mainly in the entry of outside guests and President Carlos Alvarado, as well as in the placement of the media.

Joining Alvarado in attendance were a number of high-ranking members of government, including the president of the Supreme Court, Fernando Cruz; and the Supreme Electoral Tribunal (TSE), Luis Antonio Sobrado.

Only 40 of the 57 legislators attended the event.

There were also representatives of the Fideicomiso del Banco de Costa Rica (BCR Trust) that owns the building, it’s architect Javier Salinas, who declined to give statements, arguing that a confidentiality clause prevents him from doing so.

Originally, the activity would have been carried out on the steps in front of the building, on the side facing the Plaza de la Democracia.

However, the presence of the university student protesters forced the event to be moved to the Hall of Former Presidents which is located to the right of the main entrance of the building.

Throughout the inauguration, music was heard from the tumbacocos (loudspeakers of large size and extreme volume) carried by the protesters, which collided with the notes played by the National Symphony Orchestra, also located behind the security post at the main entrance.

The controversy witnessed Wednesday morning began days before when a photo of the commemorative plaque of the inauguration was posted on social networks, with a number of errors, the most visible was the misspelling of the name of the president the Legislature, Eduardo Cruickshank, and only capital letters were used without accents,

As well as the word equidad (equity) had an additional e, “equiedad”.

The Press and Protocol Department assured that the photo circulating the social networks was a mock plate, not the final one to be unveiled.

However, in reality, the unveiled plaque was the same, except that the additional letters, the president’s last name, and some commas and periods had been corrected.

Ayales commented that it had been done with capital letters following an old-style, similar to that of the plaques placed in the Rotonda de la Patria, a room of the old parliamentary building where there are plaques containing several important proclamations.

One of the strong criticisms focused on the fact that the monument contains the names of the six legislators of the current Board of Directors, only served during the transfer of the old facilities to the new ones.

The ‘best representation of the people’

In his inaugural speech, Eduardo Cruickshank assured that the new legislative building is “emblematic and symbolic” and “the one that best represents the essence of popular sovereignty and political democracy.”

“The Legislative Assembly, by the scope of its political and multi-party representation, expresses in a better and greater way the broad popular will, also the result of electoral processes,” said Cruickshank. 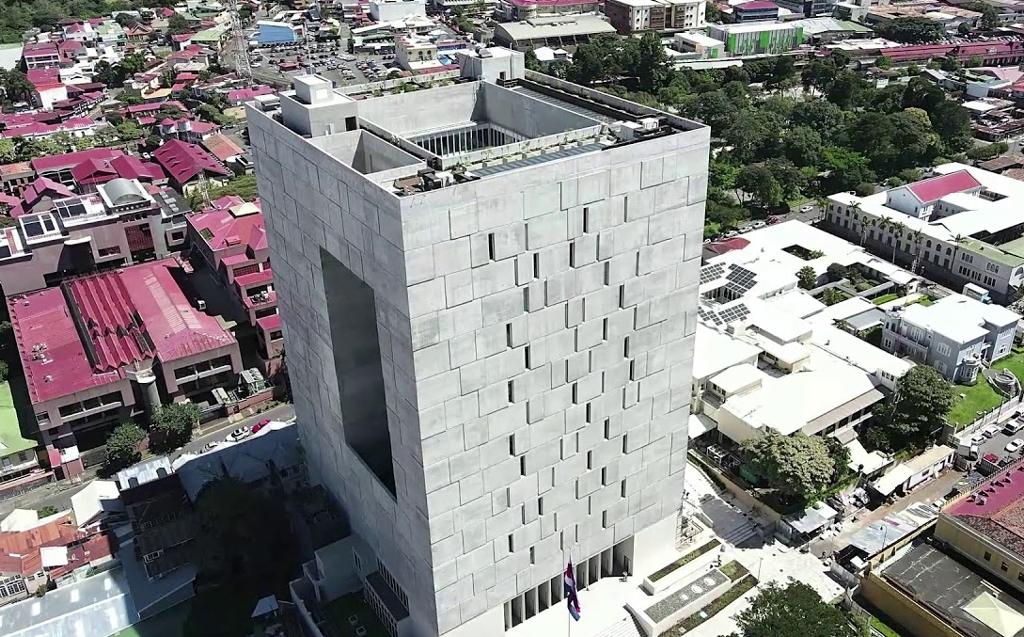 In his speech, Carlos Alvarado made a call to union, through the narration of a story told by the ancient historian Herodotus, about the war between Medes and Lydians, in the middle of which the first eclipse of history.

The metaphor tried to compare sides found today, and compare the covid-19 pandemic with an eclipse that, in the opinion of the president, should serve to unite groups in conflict, for the good of the country.

Though it was not a subject of discussion on inauguration day, the building has come under criticism from its design, called a concrete fortress to protect those elected by the people, to the decision to place barriers along the perimeters of the property to restrict access by the people.

The new home of the country’s legislative branch is under a leasing plan with the Banco de Costa Rica (BCR) Trust, costing the Costa Rican people ¢1.2 billion colones monthly for the next 14 years (¢201,600,000,000 colones) – US$336 million dollars at the current exchange rate –  that includes furnishings.

- Advertisement -
Paying the bills
Previous articleCNE: 19 cantons maintain a high risk of contagion
Next articleContagion rate rises 13.3% in one week

QCOSTARICA - In order to save resources for the State and...
Read more