Legislator: Vehicle restriction is illogical and a mockery for municipalities and businesses

Legislator Karine Niño says it is illogical the government's decision allowing commercial opening, but at the same time keeping people at home.

(QCOSTARICA) Karine Niño, legislator of the Partido Liberacion Nacional (PLN), says the vehicle restriction of the next 12 days, from August 10 to 21), is illogical and a mockery for municipalities and businesses.

Niño pointed out: “The irrational logic of the government with the measures announced yesterday (Saturday) is a mockery for the municipal sector which was breached the agreements and with the commercial sector, which in one way or another continues to hold hands despite the« opening.”

“How will economic reactivation or tourism be supported with vehicle restriction measures, if they are practically illogical?”the legislator questioned.

Niño commented that “I understand that the health issue is not minor, and it is the responsibility of each one of us to cope with the new normal, following the hygiene and distancing rules that the Ministry of Health has indicated to us. But we cannot lose the perspective that people need to eat and produce.”

Initially, the ‘closed’ phase of the 12 days of August practically shut down all commerce in orange alert zones (mainly the Greater Metropolitan Area – GAM), while retail stores and other businesses could be open in the yellow alert areas (the rest of the country).

As had been announced at the end of July, the period of August 10 to 21 in orange alert areas would also have a vehicular restriction from 5 am to 5 pm, every day, with only one day a week and one day of the weekend to drive based on the last digit of the vehicle’ license plate.

This upset many business operators wanting to remain open. The mayors of the cantons in the orange alert also banded together to protest the central government’s measures and threatened disobedience in their communities by pulling their police forces from traffic monitoring and allowing businesses within their jurisdiction to open.

The changes to the original ‘closure’ phase was to allow retailers, restaurants, services and many other businesses to remain open in the orange alert areas and unified the vehicular restrictions from 5 am to 9 pm in both yellow and orange areas.

So, take today, Monday, August 10, while businesses in orange alert areas are open, only vehicles with license plates ending in 1 and 2 CAN circulate or 20% of the vehicular fleet. 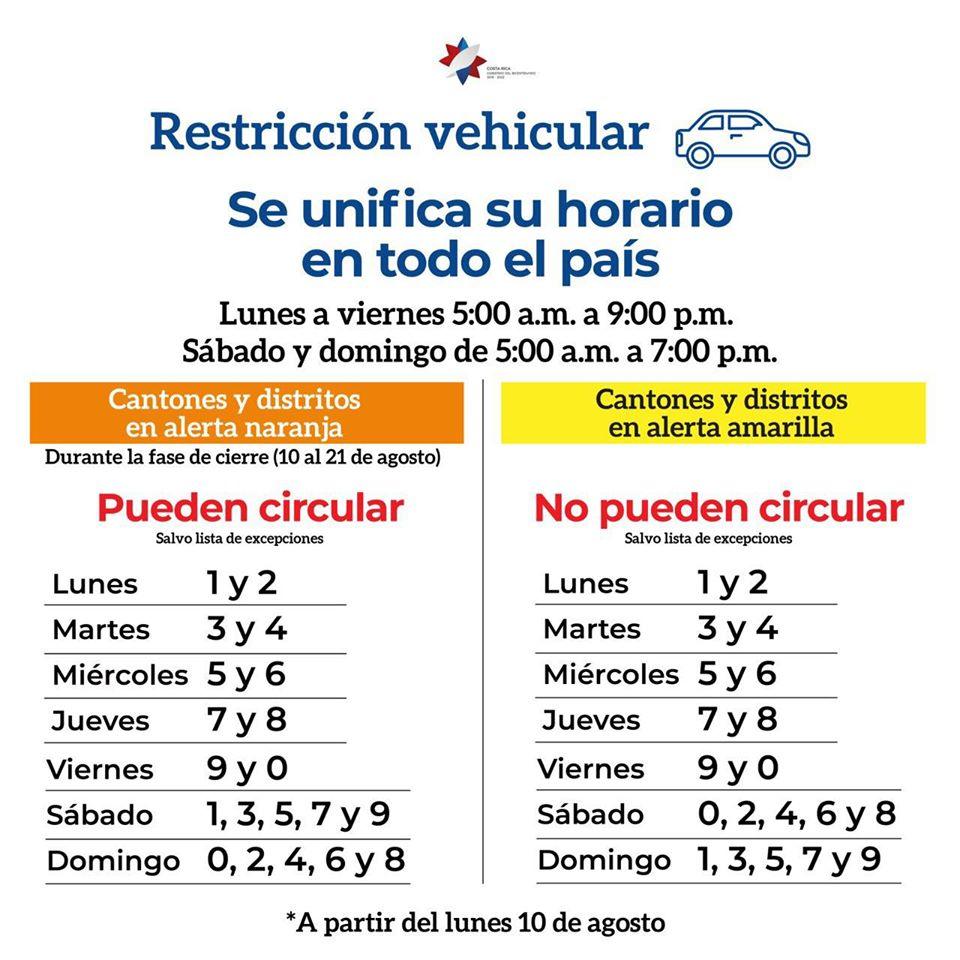 Both agreed that allowing commercial opening, but at the same time keeping people at home is illogical.

“How will the economic reactivation or tourism occur?” questions the legislators.

Muñoz, for his part, stated that “the vehicle restriction is a joke in bad taste.”

“The President of the Republic has failed to understand that this vehicle restriction breaks social bubbles for long periods of time. How is it possible that you cannot drive your car, but you can ride a bus or taxi?” he said.

The legislator assures that Carlos Alvarado also does not understand that the vehicle “is not a luxury.”

“The vehicle is to go to work, to seek sustenance, the vehicle is the way to go to find our daily bread. Very poor understanding of the reality of the economy (…) The vehicle restriction seriously affects tourism, commerce, collapses public transport, generates crowds (waiting for public transport), does not allow people to use their car s, and now the collection of the Marchamo. Who can possibly believe that this measure can benefit citizens in any way?” he added.

QCOSTARICA  - The 200 years of the Independence of...
Cine (Movies)