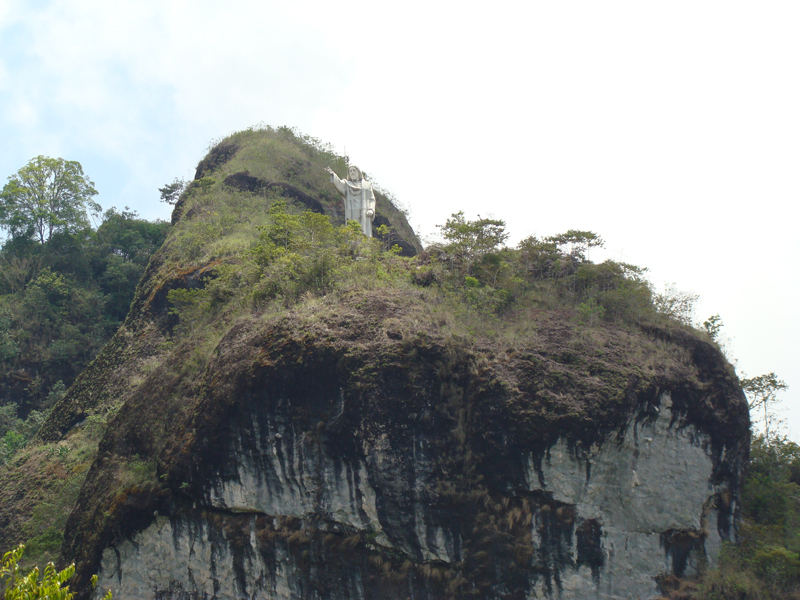 On Tuesday, a lightning bolt disintegrated the 12 metre structure (10 metres for the image and 2 metres of base) metal and fibreglass structure.

The structure had been in need of repair. The local community, with the help of the church and municipality, were looking for funds to repair the structure built in the 1980’s, that now had metal protruding through the fibreglass.

Construction of the sculpture was commissioned by the then Bishop of the Diocese of San Isidro del General, Monsignor Ignacio Trejos and inaugurated on November 23, 1980.

Sculptor Max Ulloa and his father Francisco were the designers and builders of the structure that cost a total of ¢125.000 (one hundred twenty five thousand) colones. The original estimate had been ¢95.000, but cost final cost came in higher.

In a television new interview Wednesday, Francisco, visiting the site, said he was shocked at the level of destruction and recalled the hard labour by many, that carried the metal structure by hand up the steep slopes.

The cost of the repairs to the structure had been estimated around ¢3 million colones, now it could cost up to 10 times that to rebuild.

The mountain where the image of Christ sat is 1,370 metres above seal level, on private property.

- Advertisement -
Paying the bills
Previous articleLiberia Airport, Its All In The Name
Next articleRuta 27 Re-Opened: Paso Regulado