COSTA RICA NEWS  — The Limon Carnival kicked off Friday with the usual high spirits. This is one of the cardinal tourist events in the country, effervescent to the visitor and a time for residents of the province, mostly black, to forget their problems –poverty, crime and such — and kick back with an adolescent spirit. 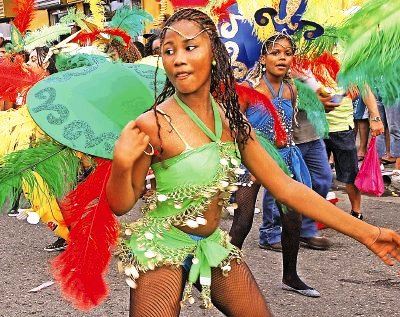 It is a celebration of life, as near a fountain of youth as one can find in this weary world. Chief among its attractions is the music that permeates the whole carnival, Caribbean beats that pulse with cheer and bright, white smiles on dark faces.

It is a celebration of the Day of Culture, a tribute to Costa Rica’s diversification — black, native Americans, Chinese and the flower garden that intermarriage produces. But the basic impulse is provided by the Caribbean culture originally brought in to build the railroad to the capital in the 19th century.

They stayed on and the country is the beneficiary. La Nacion reported that the parade began Friday at 12:53 p.m. — only 23 minutes late — right on time by Costa Rican standards. A dozen floats and eight bands participated and three hours later, when La Nacion’s story was filed, was still going on.

When this reporter many years ago phoned the JAPDEVA office in Limon to report on the build-up to the carnival, the charming woman official invited him of the carnival, saying enthusiastically, “The music is SO inticin’!” The enjoyment that the residents get from the celebration alone is enough to bring a grin to the visitor’s face…