Limon closes beaches and parks for a month

Given the increase in COVID-19 cases in the city of Limon, mayor Nestor Mattis warned that the measure could be prolonged if the contagion is not reduced.

Given the increase in COVID-19 cases in the city of Limon, mayor Nestor Mattis warned that the measure could be prolonged if the contagion is not reduced.

(QCOSTARICA) The Municipality of Limón ordered, this Wednesday, September 9, the closure of beaches and public parks for a month due to the increase in the contagion of COVID-19 in that canton.

“Our beaches became a source of contagion,” said Nestor Mattis, mayor of Limón during a press conference held this Wednesday morning.

Last weekend, photos and videos were posted on social networks of crowds of people on the beaches of Playa Bonita and Paya Piuta and other public areas of the Caribbean port city.

In addition, the majority were seen without masks or face shields.

On Tuesday (effective today), the canton of Limon was raised the alert status from yellow to orange alert due to the increase of infections in that area.

The same occurred in Playa Jaco, on the Pacific side, the CNE raising the alert level from yellow to orange for the entire canton of Garabito, which takes in the beach areas of Herradura, Hermosa and Tarcoles, among others. 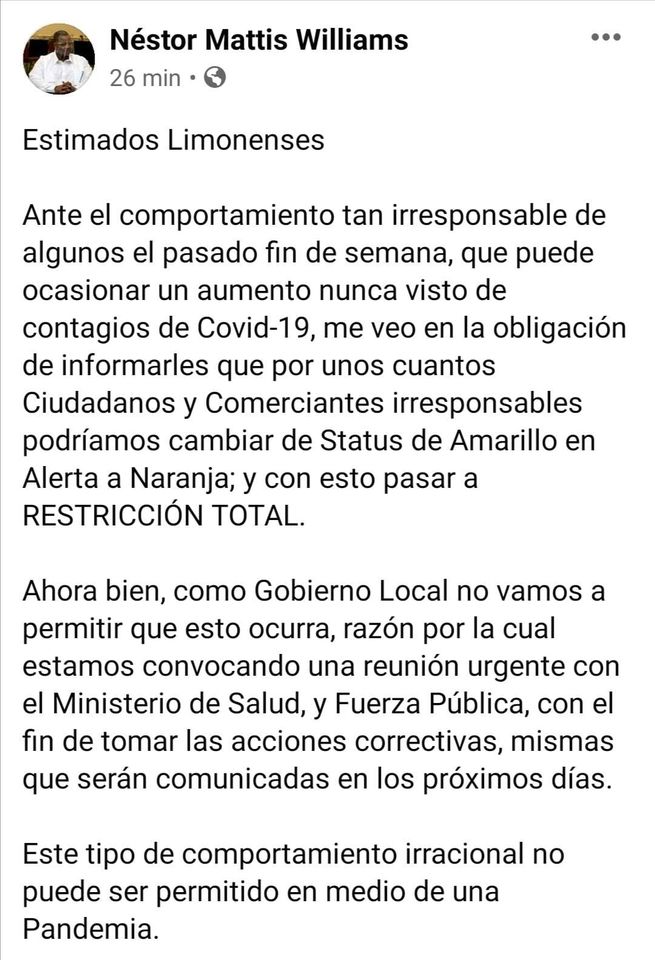 Mayor Matis criticized that the “irresponsibility” shown by some residents of Limón in recent days that has made them the municipality with the most infections in the province of Limón.

In addition, he called on religious leaders to persuade the population to respect health measures.

With the “controlled reopening” that starts today and for the rest of the month, economic activities are not affected by whether an area is under yellow or orange alert, but can be if the central government implements restrictions for an area or areas in the event of any outbreaks.

- paying the bills --
Previous articleCosta Rica betting on individual discipline against COVID-19
Next articleThe end of an era: ‘Keeping Up with the Kardashians’ will say goodbye in season 20