Luis Guillermo Solís: A President Of The People

In Costa Rica, the President does not have an “official” residence, the head of state stays in his or her private home.

Casa Presidencial, located in Zapote, on the east side of San José is not the presidential home (casa), but government offices, the place where the president goes to work every day. 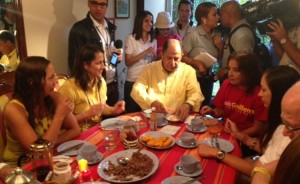 The private home of Oscar Arias in Rohrmoser (three blocks from the National Stadium), on the boulevard, a large one floor home that is landmark for addresses. From the home of Oscar Arias, two blocks (200 metros) west, one block (100 metros) north and 25 metros (1/4 bock) east… is a typical Costa Rican address. The Arias home is only marked by a flag and a constant police detail in his front yard. Anyone can approach the front gate and ring the doorbell and good chance Don Oscar himself may answer the door.

Laura Chinchilla lives in the posh Villa Real estates in Santa Ana. Her house can be said to be the smallest house in the gated residential community, surrounding my mansions that include the likes of the president of DHL. Reaching the Chinchilla residence requires passing the inspection of the front gate security and a response by those inside to allow the guest through.

Compared to Don Oscar and Lady Laura, Abel Pacheco lives in a modest home, also in Rohrmoser. The Don Abel home is indescript, like any other in the barrio near Plaza Mayor, two blocks from QCostarica.com. His former presidential security includes a police hut two houses away.

All presidents have enjoyed the use of an “official” presidential vehicle that has included cars like the Equus and Lexus, but for the most part are transported in a Toyota SUV, with a full traffic police escort to and from Casa Presidencial and official government functions.

Current president Luis Guillermo Solís is a change in the tradition. One, he lives in a condominium, a typical Costa Rican residence in a typical middle-class San Pedro community.  Living in a condo (the Villas Fontana condominium in Barrio Escalante), means neighbours have direct and unencummbored access to the president. The only clue that the country’s president lives there is the traditional around the clock Fuerza Publica (police) detail.

Though Solís is driven to work by the official driver, it is in his own private car instead of the official presidential vehicle.

And, unlike his recent predecessors, Don Guillermo moves about with little security, only sometimes with a traffic police escort. In his words, he will do so only “if and when absolutely necessary”.

The new president has said he wants “the minimum security possible”.

It is not uncommon in Costa Rica to run into the president or a cabinet minister at the local mall or supermarket.