MAG and Cen-Cinai Workers Agree To Return To Work

First trade labor union signs deal to lift the strike movement in protest of the tax reform proposal by the government. 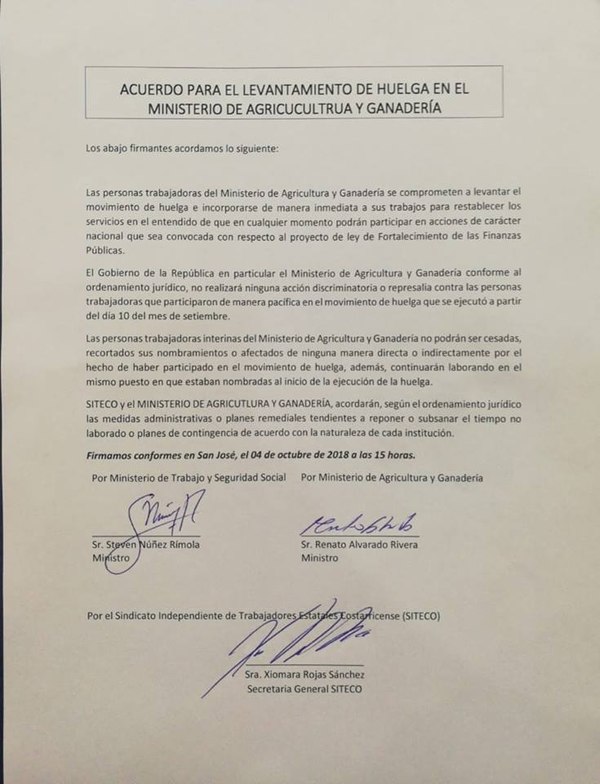 Union representatives of the workers of the Ministerio de Agricultura y Ganadería (MAG) and the Dirección de CEN-CINAI del Ministerio de Salud, agreed to lift the strike movement in these public institutions, reported the Minister of Labor Thursday afternoon.

The ministra de Salud, Guiselle Amador, and the director of the Cen-Cinái,  Lidia Conejo, signed a similar agreement.

In the agreement, the workers of the Cen-Cinái and the MAG, undertake to lift the strike movement and immediately return to work. The workers retain the right to participate in any lawful national demonstration with respect to the tax reform bill.

For their part, the public institutions agreed not to take any retaliatory action against workers who participated in the strike.

Precisely this Thursday, the courts declared the strike of the workers of the Patronato Nacional de la Infancia (PANI) illegal, thus reaching 13 the number of illegal strikes of the 32 petitions filed.

The strike by the workers of the Institute of Alcoholism and Drug Dependence (IAFA), was declared legal.

This Friday, the national strike enters its 27th day.