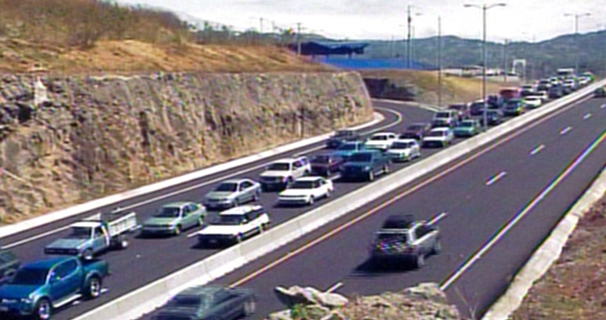 If you thought the traffic was nasty going to the beach the last couple of days, expect the worst today and tomorrow, as most will head home from the beaches and resorts, ending the Semana Santa holidays.

One of the most congested is the San José – Caldera (Ruta 27) between Orotina and Cuidad Colón (Santa Ana).

On Wednesday and Thursday the Autopistas del Sol, the road concessionaire, opened all lanes one way to Puntarenas between 6:00am and noon. Today (Saturday) and Sunday it will open all lanes one way in the direction of San José between noon and 8:00pm.

The one way is between the Pozón (Orotina) and Cuidad Colon (Santa Ana) toll stations.

HOWEVER, despite the measure traffic on the “Caldera” was, is and will continue to be a mess. The obvious is just volume, but more, the lack of alternate routes AND the bad drivers – drivers who drive too slow; or too fast; impatient, driving on shoulders, crossing double lines to get one car ahead; weaving between lanes, etc, etc, etc.

Friday night, drivers heading for the Central Valley were hit with a “wall” of vehicles at the Pozón toll station. The heavy flow of traffic continued to Atenas, where it started easing off as many heading for different directions. The next congestion came at the La Guacima toll station.

It was just volume of traffic, as many vacationers decided to head home early, beating out the madness that is expected today and tomorrow. Or maybe not, since…