Once again The “Lagarteada” Unites Thousands In Santa Cruz 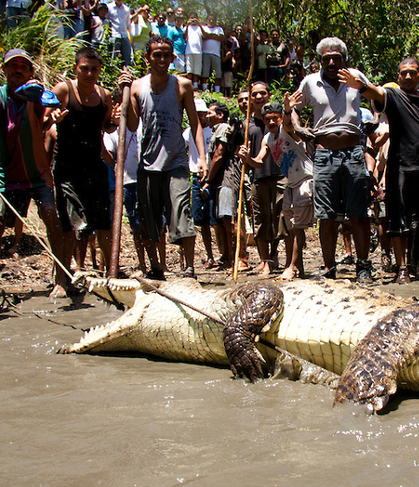 You can’t be in Costa Rica during Semana Santa and not visit Santa Cruz in Guanacaste. Not for its beauty nor its nearby beaches, but for annual traditional “Lagateada”. 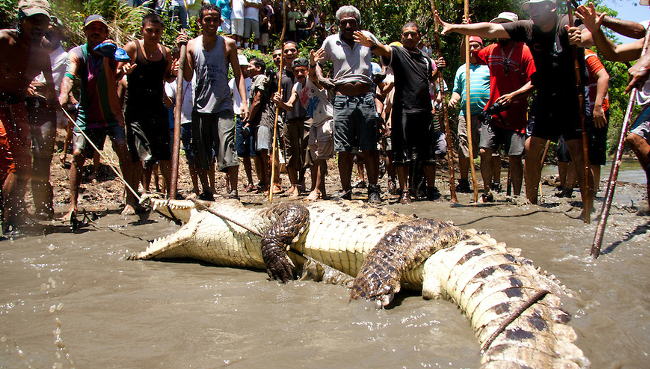 Every Good Friday, thousands flock to the Ortega river in Santa Cruz for annual capturing a huge lizard. This year, the catch was a yellow belly of about four metres (12 feet) long.

Official estimate puts the number in attendance at 4.000, between community residents and visitors from around the country and the world.

The tradition began some 150 years ago when a local resident capture a large “lagarto” on Good Friday. The dictionary defines lagarto as a lizard, alligator (caimán).

Today the tradition has changed a lot, but it remains, a group of about 30 men are involved in capturing the lagarto.

The lagarto is then taken to the Plaza de Ortega where there is a great celebration.

Some residents say that in the past the fat of the lagarto was removed for alleged medicinal properties. However, today the practice involves capturing the lagarto and releasing it the following day.

Friday’s catch is to be released this morning (Saturday) at 9:00am back into the Ortega river, in the same spot it was captured.