Man Who Died In Foiled Robbery Had A Criminal Past

The woman, the intended victim in the foiled robbery, is the ex-wife of one the assailants and mother of the other two, all three shot dead by the bank security guard

UPDATED Jan 6 – Carlos Quesada Ramírez, one of three assailants shot dead on Thursday in Coronado, had a criminal history that included time in jail for theft and drug possession.

Quesada had a plan. With the help of his two sons, who also died in the shootout with the bank security guard, he was going to have his payday, a ¢30 million (US$50,000) payday, by robbing from the lady on her way to making a deposit to the BAC San Jose branch in Coronado.

The plan didn’t go well.  Quesada probably didn’t count on the quick action by the security guard who has remained nameless or that the guard would fire back. 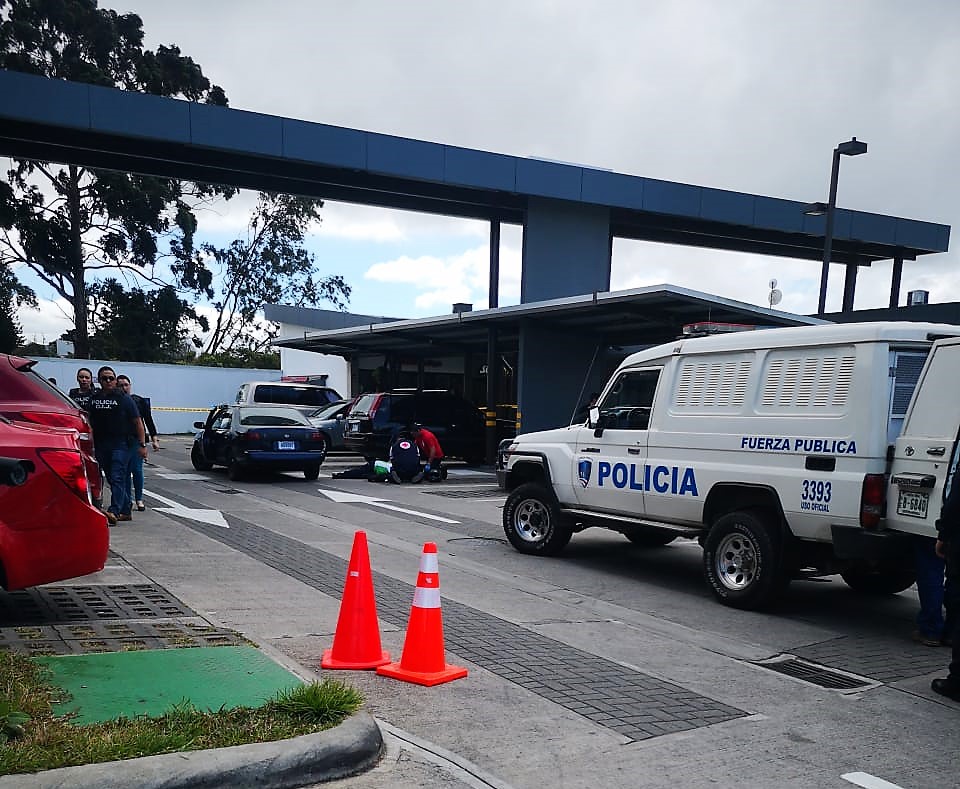 Crime scene investigators said the guard fired a total of 10 rounds at the three assailants, hitting the elder Quesada and his two sons, Jessie Quesada Fuentes, 29, and Daniel Quesada Fuentes, 21. Two of the three lay dead at the scene, the third died in hospital minutes after arriving at the medical center.

The Ministry of Justice reported Friday that Quesada Ramírez was sentenced in 2011 to eight years in prison and had released on September 23, 2017.

Marco Carrión, interim head of the Criminal Investigation Department of the Organismo de Investigacion Judicial (OIJ), reported that Quesada Ramírez had been arrested in 2010 for threats and in 2011 for drug possession.

In this criminal trio, the father was the most experienced criminal. His older son had a criminal record, while his younger son, was clean.

We will never know who decided what role they would play in the act, but from the video, we can see the father hitting his victim with the butt of his pistol, snatch the money bag and then get into a scuffle with two other men outside the doors to the bank.

The younger son was running interference. At first he seems to be a bystander, watching the guard fire and hit one of the assailants (his brother) until he picks up his brother’s gun and fires at the guard. 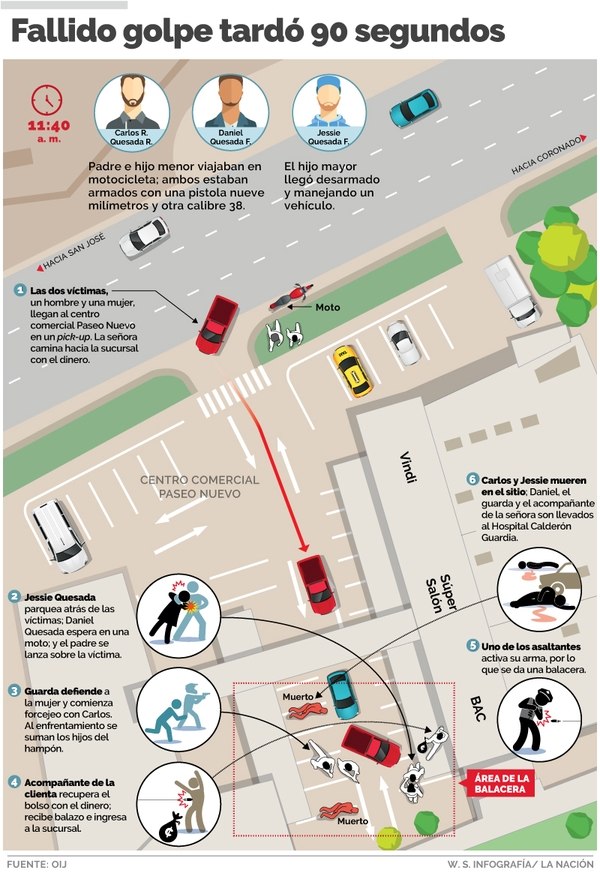 The struggle and shootout with the guard ends with the death of the trio. The security guard was hit in the shoulder but lived. The woman also survived the attack directly to the head by Carlos and with the butt of his gun.

We learned of Friday that Carlos and the woman, identified by her last name Fuentes, had been married and was the mother of sons accompanying Carlos in the robbery.

“The action happened so fast that the perp immediately takes the bag but in the same moments, almost simultaneously, the security officer approaches him and there is no real disempowerment of the money,” said Carrión. 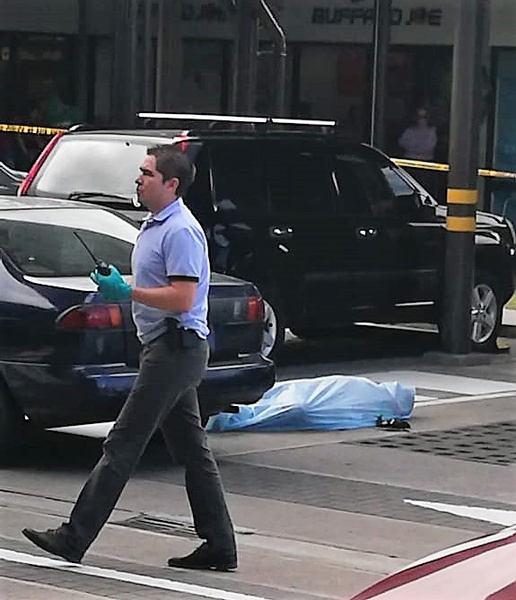 Carrión admitted on Friday that they haven’t been able to learn much about the trio, only that they were from Alajuelita.

Carrión added that Jesse (the older son) had a criminal record for possession of a firearm. That was in 2009, but nothing after that. 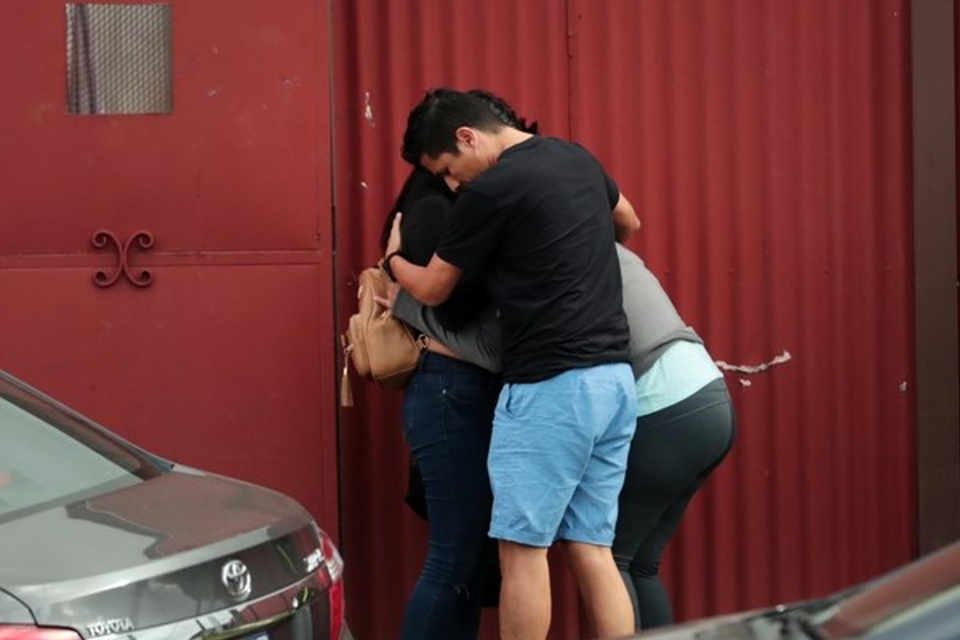 “We have not been able to establish in any formal employment for three,” said the OIJ chief, after speaking with family members.

On the day of the foiled robbery, the injured woman, identified by her last name Fuentes, posted a message on her Facebook account saying: “He who is free from sin throws the first stone! Today is the saddest day of my life, do not judge if you do not know.” 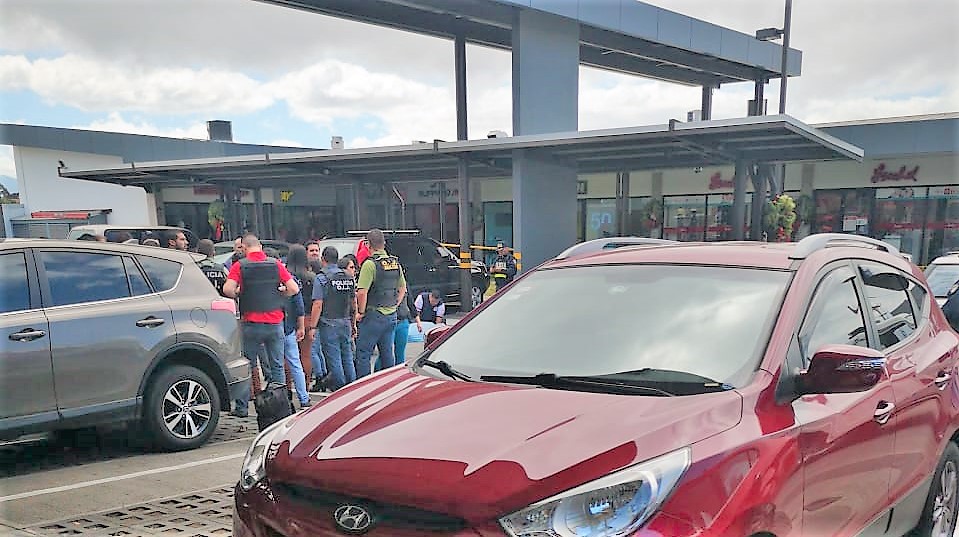 Immediately dozens of users started insulting her in the comments, some accusing of her cowardice, lying dead. Shortly after she closed the account.

La Teja reports*, recorded in the Registro Civil (Civil Registry) Quesada and Fuentes were married on July 4, 1998, and had four children: the two who died on Thursday in the assault (the oldest), and a boy who is 19 and and a girl now eight.  The couple divorced on May 3, 2017, when Carlos was still in prison. The Civil Registry records Jessie with two children, a nine-year-old and seven-year-old, but never married; his brother Daniel, also never married, had a two-year-old baby.