“Marcha de los Gatos” In San Jose On Tap For Today, Day 17 Of The National Strike 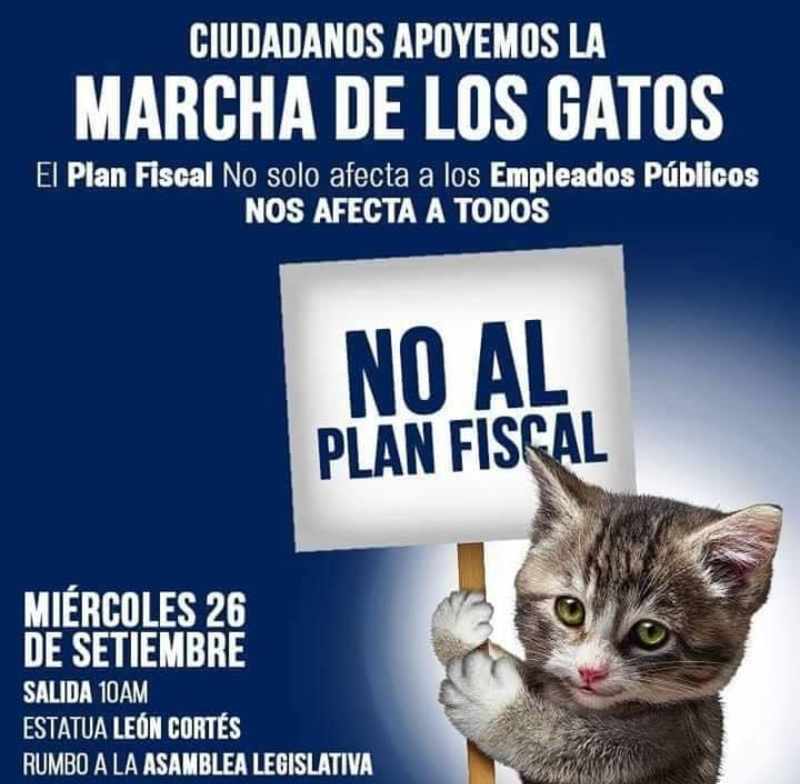 With banners illustrated with cats, public labor unions are calling for another national “grand march” for today, Wednesday, September 26, in downtown San Jose.

The “Marcha de los Gatos” (also called “Marcha de los 4 Gatos”) – “March of the Cats” – has ironic overtones and arose in response – according to the unions – for those who maintain that the strike movements are supported only by “a few”.

In popular jargon the phrase ‘ 4 Gatos’ (four cats) means the scarce attendance of people in an activity and, since day one of the national strike, was the criticism imposed by those who oppose the movements.

However, in day 17 of the national strike, organizers expect a large turnout starting in the Leon Cortes statue in La Sabana, the along Paseo Colon and Avenida Segunda and onto the Plaza de la Democracia and the Legislative Assembly. 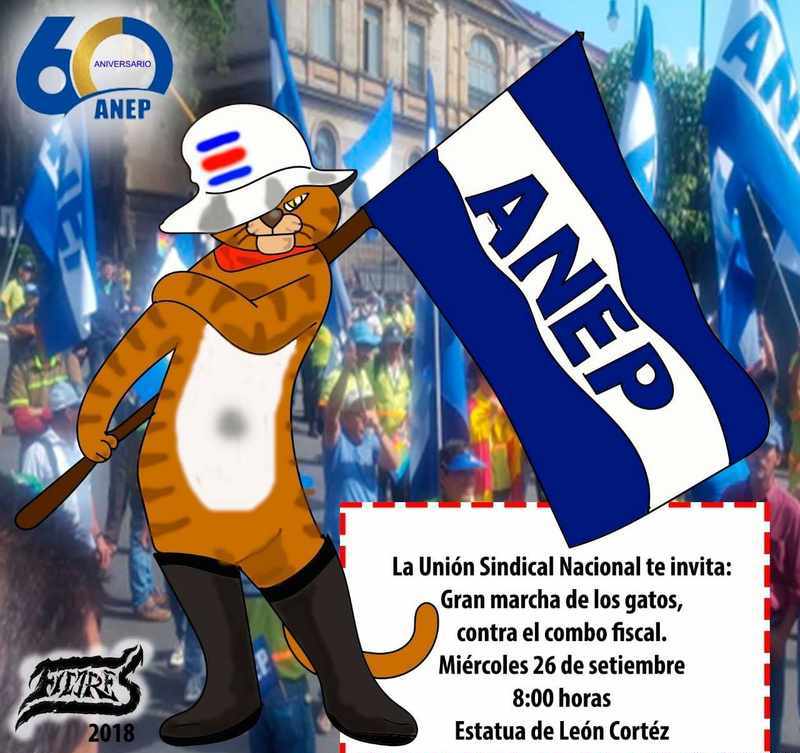 Albino Vargas, head of the ANEP, denounced a supposed blackmail on the part of the government, through the Ministry of Public Works and Transportation (MOPT) to prevent bus companies from renting their units to the unionists to transport people to the movement on Wednesday. 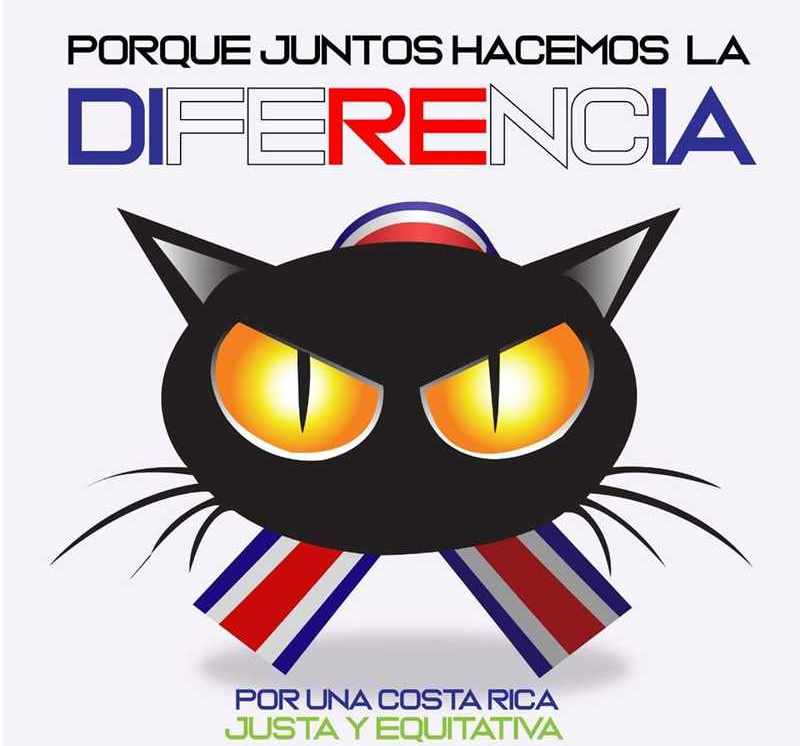 “We call on all sectors and the working people to join the demonstration on Wednesday, September 26, where we will all be united. All the guilds, all the wills, all the banners, all the badges because this fight comes from the heart. 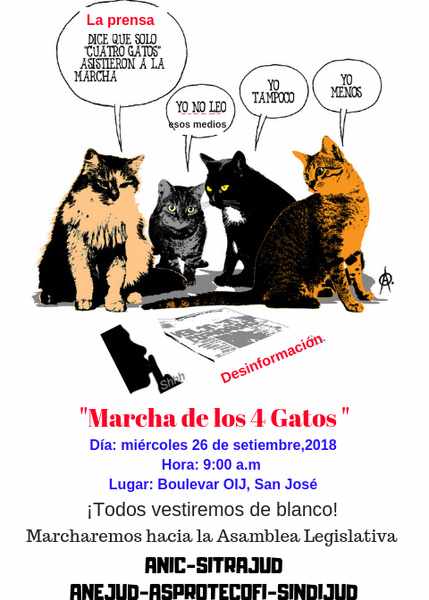 “We are not going to accept bill 20.580 (popularly known as plan fiscal or tax reform) because it hits the middle class; to the working class that has a job, but that is super indebted; It hits the people who are unemployed and those youth who can not find work,” Vargas argued, at a press conference held on Monday night. 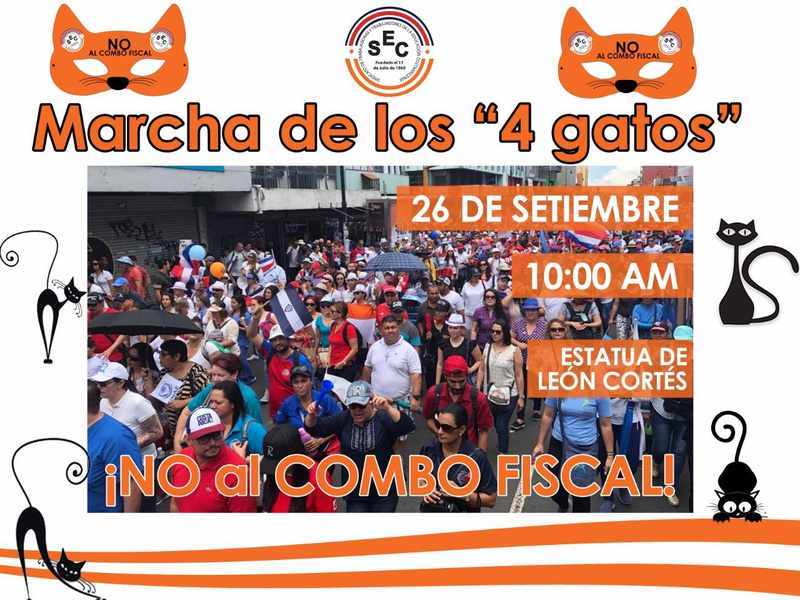 Confirming Vargas’ claim of the MOPT clamping down on bus operators reports last night included authorities detained a bus from Pavón de los Chiles that was to carry a large group of campesinos (farmers) and indigenous people to San José.

While in Liberia authorities stopped 12 buses, confiscating the license plates and threatened to cancel the concessions. There are also reports of buses stopped in Siquirres de Limón.