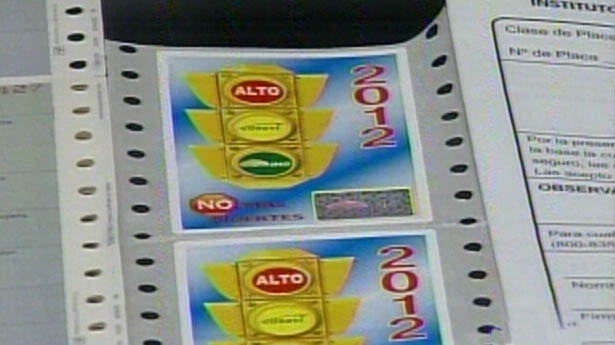 In mid-November the Instituto Nacional de Seguros (INS) will launch the annual campaign of collecting the Marchamo, the annual vehicular circulation permit.

The INS has yet to announce if there will be an increase this year as it continues waiting the decision of the  Superintendencia General de Seguros (SUGESE) which is still analyzing the request for a rate increase.

The 2013 Marchamo is due payable by December 31 of each year and unlike in the past decade, there is no grace period as come January 1 drivers on the road without the current Marchamo are subject to a fine.

The number of unpaid includes vehicles that are no longer in circulation, a result of an accident or repairs are too costly as compared to the value of the vehicle, and have never been unregistered with the national registry. These vehicles continue to pile up the cost of the yearly Marchamo, plus costs like fines and interest and will have to be paid if and when the vehicle is ever made road-worthy.

The annual Marchamo can be paid at more than 1.200 points of sale that includes banks, authorized INS insurace agents and the INS directly. The Marchamo can also be paid online.

QCOSTARICA - Five of the 82 cantons of Costa Rica register fewer than 10 active cases of covid-19 to this date, according to the...
Business

QCOSTARICA - Panasonic announced that it will invest US$10 million dollars in the expansion of its plant in Costa Rica, in order to move...
Expat Focus

The filming of the second season of the reality show “ReverseD” on the Discovery Channel officially began last Sunday, February 21, in Atenas, in...
Latin America

Q REPORTS - Poverty in Latin America increased in 2020 to the highest levels in the last 12 years, reaching 33.7% of the total...
San Jose

QCOSTARICA - After a year of no work, engineers, technicians, producers, cleaners, food and beverage personnel, among others, held a peaceful march this Thursday...
Redaqted

Q TRAVEL - Located in the extreme north of the Pacific coast, in front of the Santa Rosa National Park, in the sector of...
The Americas