The event was held near the old González cinema, on a platform placed in front of the Foreign Ministry building, in Managua, where all day there was a strong police deployment, riot police and private security. 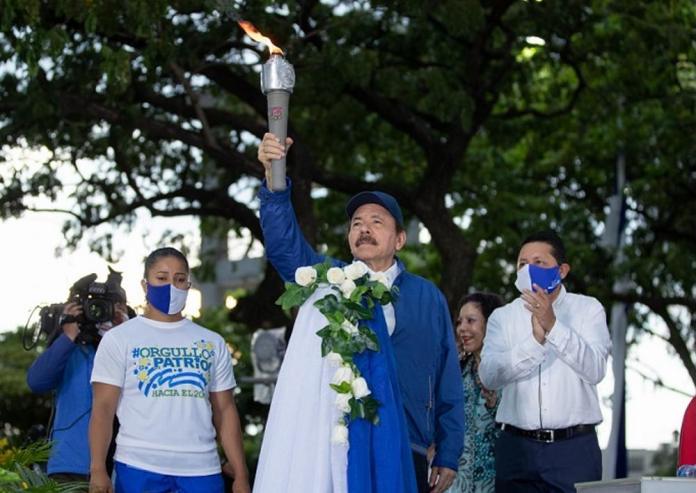 (TODAY NICARAGUA) Amid a strong police deployment, riot police and private security, dictator Daniel Ortega received this Saturday the flame of the “Torch of freedom and fraternity”, which runs through Central American countries, on the occasion of the 199th anniversary of the Independence of Central America, which is celebrated on Tuesday, September 15.

Ortega, accompanied by his wife and Nicaragua’s vice-president, Rosario Murillo, spoke for five minutes at the event, one of his shortest speeches, in which he recalled the independence of Central America. Still, the event was hit by rain, and Ortega retired soaked from the stage.

Neither Ortega nor Murillo wore a mask during the event.

“This torch is traveling the country, from hand to hand, from arm to arm, this torch of freedom and peace that the Central American people defend and that the youth defend,” said Ortega.

The event was held near the old González cinema, on a platform placed in front of the Foreign Ministry building, in Managua

To maintain tight security, the streets of that sector, where the Luis Alfonso Velázque Park is is located, looked empty most of the day. On the stage, the blue and white National Flag stood out, interspersed with some red and black flags of the ruling Sandinista National Liberation Front (FSLN) party. Few chairs were placed, with some distance, occupied by students.

Although on this occasion Ortega raised and exalted the National Flag, Nicaraguans are persecuted, detained, and imprisoned if they publicly display this national symbol. Since 2018, when the civil protests began, the blue and white became a symbol of citizen protest, which is an affront to the Ortega dictatorial regime.

The torch was given to Ortega by the outstanding athlete, originally from Bilwi, Puerto Cabezas, Sema Nancy Ludrick. Then the dictator delivered the flame to student Byron Alexander Valdivia Chávez, president of the Federation of Secondary Students (FES), of the VII district of Managua.

The torch arrived in Nicaragua on September 10, by way of Honduras, through the Las Manos border. In the following days.

This Sunday, September 13, the Torch will be delivered to the authorities of Costa Rica, in Peñas Blancas, the southern border of Nicaragua.

However, this year, unlike since 1964, the torch run will physically end there, as Costa Rican authorities are offering its people a virtual tour of the Independence Day Torch, arriving in Cartago on Monday, September 14.

- Advertisement -
Paying the bills
Previous articleThe Torch of Independence does not go out: follow the tour virtually
Next articleLocal police chief jailed for alleged link with Sinaloa cartel

QCOSTARICA - For Thursday, On January 13, the Ministry...
Politics