May 1 March Peaceful and Orderly 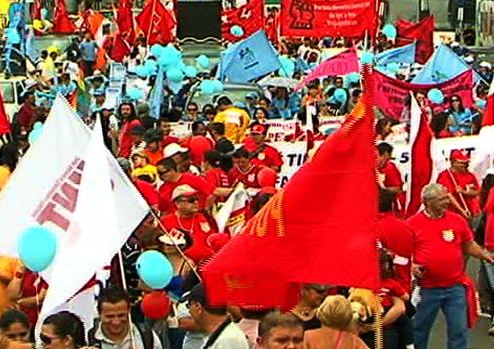 In typical Costa Rican fashion, yesterday’s protest march was characterized as peaceful and orderly. Some may go as far as saying, boring.

With banners and music many took to the streets of downtown San José,  however, attendance was markedly lower than in previous years.

The largest groups of protestors was made up of members of the UNDECA, SEC, APSE and ANDE workers unions.

Two hours before the protest march began, at 8:00am the Catholic Church offers the traditional Labour Day mass, taking the opportunity to make a political statement, asking the new government to open real opportunities in development banking.

While the workers unions have similar agendas, in yesterday’s march there was a visible division in the streets. The  unions marched in distinct separate groups along Avenida Segunda, unlike their traditional grouping together in protests.

The protest can be described as dull, even the group known as “Los Anarcos” (The Anarchists), who hid their faces behind masks, took part in the march but unlike in previous years, did not create any disturbance.

- Advertisement -
Paying the bills
Previous articleMixed Acceptance of Laura Chinchilla’s Final Report To The Nation
Next articleApple iWatch in Production!

TODAY NICARAGUA – In the past week, a total...
Chile