Born and raised in Costa Rica, Melissa Guzman has always had a passion for great food. Originally from a small, traditional farming town in the mountains of Cartago, she grew up with many traditional recipes that were shared together with friends and family.

After getting married and moving to the beach, she discovered the other part of the Pura Vida lifestyle. An active lifestyle, along with a healthier and lighter diet which lead her to the recipes and secrets she is wanting to share today.

Working in the tourism business in Jaco Beach, Melissa would often have requests from foreigners asking her about local foods and some of her recipes. One day a traveler told her, “you should make a cookbook.” Two years later here she is.

Living Longer, Healthier & Happier – Recipes from Costa Rica is a collection of traditional and modern Costa Rican recipes. The book features large and professional photos of each recipe. “I really don’t like cookbooks that feature recipes without photos so wanted to make sure that my book highlighted each recipe with a great photo.” said Melissa. But beyond the recipes, the narrative focuses on much more. 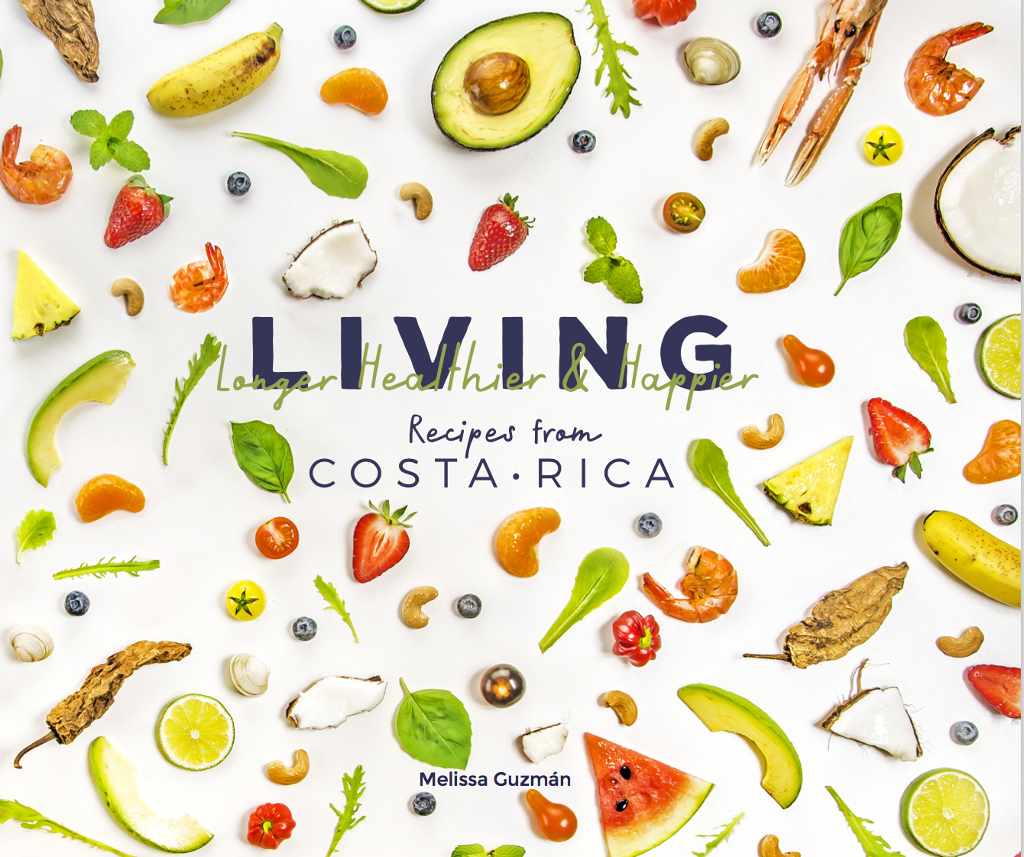 The book and its recipes is really about the Costa Rican lifestyle, what Ticos refer to is the “Pura Vida”, which focuses on a healthier and happier lifestyle all of which is centered around the food and culture of Costa Rica. While the recipes are one step to a better well being, the book features a number of tips to living longer, healthier and happier.

The book was just recently published and made available for sale a few months ago.  We sat down with Melissa to talk more about the book and Costa Rica cuisine.

Q:  Congrats on the book, looks great, so where are you selling the book currently?

MELISSA:  Thanks, yes I’m very happy on how it came out, we have really received a lot of compliments, people really seem to love the photos.  We currently have it in all the Britt stores, including the airports and some local places in Jaco, but people can also buy online at recipesfromcostarica.com, we ship both to the US and within Costa Rica.

Q:  Great.  I know Costa Rica cuisine isn’t well known internationally, why do you think that is?

MELISSA:  I think Costa Rica cuisine is still evolving.  There are many different regions throughout the country that have their own traditional dishes that are amazing but sometimes just aren’t presented or shared well with tourists.  I think we also just have not seen enough of more upscale presentations of our cuisine, most of the time our food is only found at sodas, but I think that is beginning to change.  More restaurants are opening up in which they are nicer settings and maybe adding some modern fusion to our traditional recipes which should help get much more exposure.

Q:  Are your recipes all traditional?

MELISSA:  In my book, I feature a mix of traditional recipes that I grew up on, but have also included some modern twists.  For example, I have a Gallo Pinto recipe, that is as traditional as it comes in Costa Rica, but have an option to use quinoa instead of rice.  Taste amazing and it is even healthier.

Q: Yes it seems like the healthy living is a big focus for you?

MELISSA:  It is.  The book is about embracing the principals of the Blue Zone and a big part of that is a healthy diet, but we also stress the importance of a healthier and slower lifestyle that is all about living the Pura Vida we know so well in Costa Rica.

Q:  I know you self-published the book, what was that process like?

MELISSA:  Oh it was a process.  The vision and idea was all my husband and I and we really did it all from scratch.  He shot all the food photos and our designer helped with the lifestyle pics.  We went through some trial and errors but hooked up with local designers that were big part of our success, they did a great job with laying it all out for us, including the design of our cover.  From there it was figuring out how to get it printed.  We ended up printing in South Korea , teamed up with a company that was able to help us with the entire process.  We were fortunate and thankful to find some great people in making this book possible.

Q:  That’s great to hear.  Well after looking at this book I have to admit I’m pretty hungry.

Thanks again to Melissa and we look forward to sharing some of her recipes in the future.

QCOSTARICA - A 4.7-magnitude quake woke up the residents...
2022 Elections