Venezuela Rejects Statements of US Spokesman 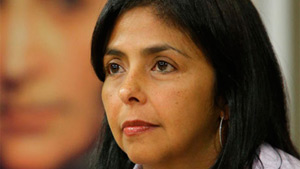 From her Twitter account, diplomatic condemned the attempt by the US to link the murder of Luis Diaz, of the opposition Democratic Action party (AD), with the legislative elections on December 6.

Rodriguez described the allegations of Kirby as interfering, insolent and false.

According to the US spokesman, the death of Diaz is an intimidation of opposition candidates, statement qualified by Venezuelan Foreign Minister as an act of bad faith and desperation.

The minister also rejected the support given by the State Department to the Venezuelan right and criminal gangs associated with it.

According to the general secretary of AD, Henry Ramos, Diaz’s death was caused by armed individuals in the United Socialist Party of Venezuela (PSUV), who fired from a vehicle, he said.

President of the Republic, Nicolas Maduro, denied yesterday any link of socialist organization (led by him) with that, and said that the right tries to defame the revolutionaries, while urged Ramos Allup to prove their claims.

According to the head of state, all relevant authorities are instructed to thoroughly investigate the incident and said that concreted the first evidences he will convene a press conference.

However, Maduro said that the Ministry for the Interior, Justice and Peace is on the trail of a possible settling of scores between criminal gangs associated with the right.

The accusation of Ramos Allup is untrue, he said since the first reports.

The day before, other leaders of the PSUV presented proofs of the relationship with Diaz confessed criminals and armed gangs affiliated to the right.

QCOSTARICA - The increase in covid-19 cases and hospital...
News