Minister of Labor, “We are very close to an eventual agreement”; Unions, “Strike Continues”

Both sides are positive an "agreement and consensus" can be reached today, a step closer to end the national strike today in its 19th day 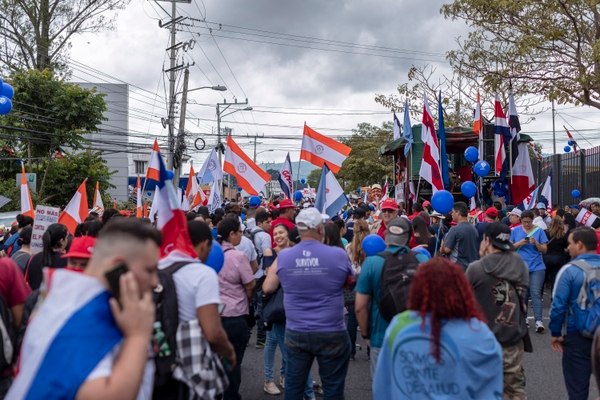 Despite the number of resultions to declare the national strike – now in its 19th day – ‘illegal’ is up to seven, the strike continues, though ther was a glimpse of hope in the early hours of this morning, Friday, when both sides alluded to a possible agreement today, the day both the government and union leadership previously agreed would be time limit of the talks.

At 12:58 am, Gilberto Cascante, head of the Asociación Nacional de Educadores (ANDE) – National Association of Educators, said the “the strike continues”, but both sides have agreed to continue talking, to meet at 3 pm in the Archbishop’s House, next to the Cathedral of San José, always with the mediation of the five bishops of the Catholic Church.

Moments earlier, at 12:50 am, the Minister of Labor, Steven Nuñez announced, “We are close to an agreement”.

The minister declared: “We took important steps, we found consensus points of agreement. We are very close to an eventual agreement. Also remember that we have until 10 pm today at the latest and we are close to that. It is now up to each of the parties to make the assessments of this eventual agreement for today’s meet at 2 pm here (Archbishop’s House) and see if it is possible to inform you of an agreement.”

As to if there is a possible agreement, Cascante said they (union leaders) have to consult some of the aspects of the discussions so far and that any agreement reached today will require the consultation of the base organizations.

Both sides had spent the last 12 hours in talks.

If an agreement is reached, the next step is for both sides to begin the process of a formal dialogue with the objective of putting an end to the strike.

Throughout the talks, the 22 trade unionist bloc has demanded that the government withdraw the Plan Fiscal (tax reform) that is currently in the Legislative Assembly, something that Casa Presidencial (Government House) does not accept as long as the strikes continue, a strike which has affected mainly the country’s public health, students of public schools and colleges.

QCOSTARICA - Modifying the hours of the sanitary vehicle...
Guanacaste