Miss Cost Rica, Karina Ramos: “I Am Living The Dream” 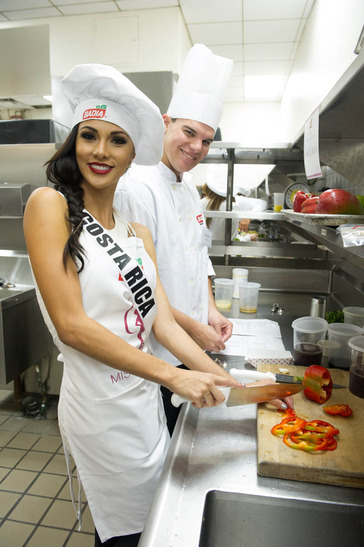 COSTA RICA EXTRA – From Miami, Florida, Miss Costa Rica Karina Ramos spoke to La Nacion of her emotions in less than a week of the finals of the Miss Universe pageant.

On January 25, in Miami the 88 candidates will strive for the Miss Universe crown.

Our representative at the event says she will do the impossible to sneak past the group and make it to the finalists, sure that she will make the first cut.

The 21 year old Costa Rica beauty says that it has been a grueling pace so far, that even her “eyelashes hurt”, but will not show any weakness for she is “living the dream.”

In a telephone interview with La Nacion, from her hotel at the Trump National Doral, Karina says she is happy, ending each day hypertense with emotion that she has a hard time falling asleep.

Miss Costa Rica says one of the most difficult things for her is having to get up early in the morning. Her day starts at 6:30am and usually ends around 11:00pm. She says she is getting along well with Miss El Salvador, Patricial Murillo, her roommate. “She is one of the few girls I had spoken to over the internet before my arrival,” said Karina.

Asked if she is confident, Karina said “Not at all! No way! I was talking about it with a journalist, and some countries are heavy weights and almost always are in the finals. However, there are countries that want to come up, we would like to be the change and that means we have to try harder to excel. So confident no.”

On meeting Donal Trump, Karina said “it was amazing!”

Trump, the man behind the pageant made his appearance at breakfast on the day of the official photo session. “All the girls threw themselves at him. I stayed at my table. I think it was a lack of respect (of the other girls), because he came to have breakfast.” said Karina.

“When I finished (breakfast), I, with some of the other girls went over to say hello, we took photos and that was it,” she added.

Which countries are among the favorites?

Karina said that Venezuela and Colombia have a lot of public support in Miami, as there are many Venzuelans and Colombians in Miami.

“I think I will use the same weapon I used in Miss Costa Rica: my personality and charm. I think many girls compete with their beauty and forget about the other points that are also important. At the interview I will speak both in Spanish and English,” said Karina.

Do you have your evening gown picked out?