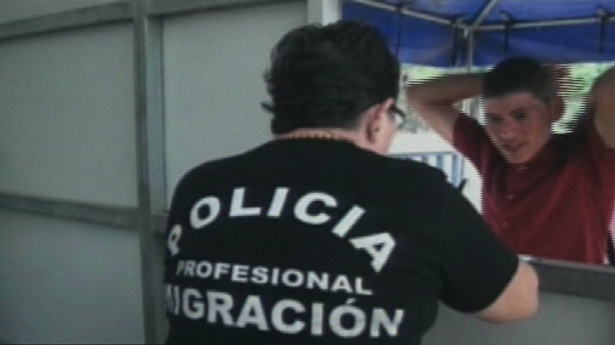 The director of immigration Freddy Montero, said the attack from a group of men occurred around noon. Montero said the officers were in Los Chiles as part of the increased border controls for Semana Santa.

According to reports, the six immigraton police officers were patrolling the area when they observed a car with several people inside and decided to intercept and search. The report said the group of men in the vehicle got out quickly and fled before the officers could detain them.

The officers were able to detain the man and arrange for him to be transferred to the nearest prosecutor’s office (Fiscalia), when a group of about 25 men began pelting the officers with rocks and beating them with sticks, in an attempt to free the man.

The official report says that one of the officers opened fire during the incident, impacting one of the men in mob in the leg, and  had to be treated by paramedics.

During the brawl with the mob several officers suffered blows to the head, back and arms.

QCOSTARICA - The bridge located on the Ruta 27 in the area of the Forum de Santa Ana continues to represent a danger to...
National

QCOSTARICA - The pandemic has allowed many people to telecommute, so technological facilities allow that as long as you have a laptop and a...
National

QCOSTARICA - It is totally false that the Government has changed the sanitary measures, as claimed by disinformation messages circulating on social networks and...
Breaking

QCOSTARICA - The sharp increase in the number of new daily cases of covid and people requiring hospitalization is the reason for the bringing...
Consumption

QCOSTARICA - If you haven't gotten over the whopping increase in fuel prices that went into effect this Wednesday, ready for another, the fifth...
National

QCOSTARICA - The increase in covid-19 cases forces the Ministry of Security to intensify actions to verify compliance with sanitary measures. Daniel Calderón, director of...
Front Page

QCOSTARICA - Following is a translation of the editorial in La Nacion Friday following the report that the last 3 kilometers of the expansion...
Culture

QCOSTARICA - The building that housed the Key Largo adult entertainment center, in the heart of San José, will have a new facet: it...