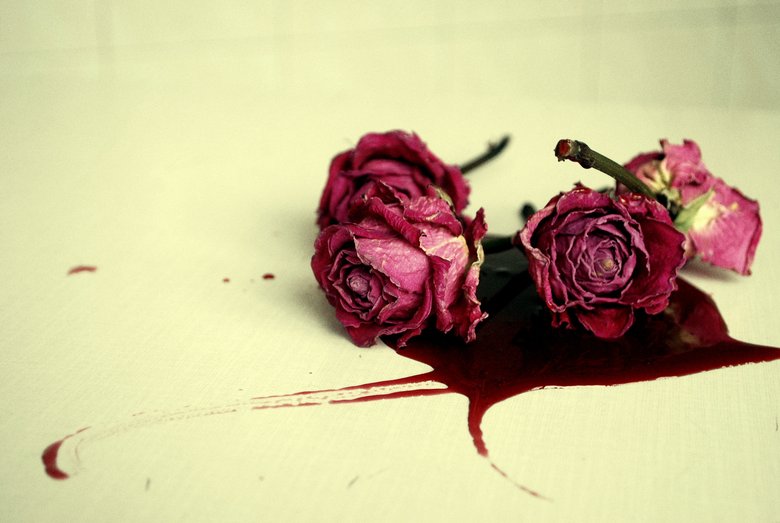 The story goes that Father Valentine, or maybe it was Bishop Valentine—the legends vary—was performing secret marriages in direct defiance of Claudius, who’d outlawed them. Claudius was trying to build an army so that he could cruelly conquer something, and men without wives or families were easier to recruit. He enforced his marriage ban by making a bloody, public example of the rebellious, love-crazy priest.

Now, a zillion years later, to honor the day they dragged Valentine’s headless body through the streets of Rome, we give each other candy hearts and flowers. And Valentine’s name is dragged through every greeting card and candy aisle in the world, starting almost the split second after Christmas. And as many people hate him as love him—the poor, murdered, romantic idiot.

In its proper historical context, Valentine’s Day just makes my personal experience with the holiday seem less sad and more on-point. Wouldn’t an authentic celebration be as much about agony as romance? After all, without mean ol’ Claudius there would be no St. Valentine.

My early Valentine’s Days were innocent, but started the crushing descent into agonyville. In fifth grade, we decorated milk cartons and shoeboxes to be our Valentine mailboxes, for those little cards you bought in packs and handed out in bulk. I slaved over my design, a cuckoo clock theme, only to lose the decorating contest to a girl whose parents had obviously made her entry for her—a three-tiered bridal cake constructed out of Cool Whip containers and perfectly formed Elmer’s Glue icing flowers. Jerks.

I didn’t win, and I didn’t get a “special” Valentine from Caleb Frati, either. He was the cutest boy in school—he of the earring and the rattail and the big dreamy eyes. I’d envisioned him drawing me Optimus Prime or some other Transformer, with “I heart you” hand-stenciled in big Metallica lettering. He did no such thing, and I left school dragging my dumb, loser cuckoo clock behind me, my heart a little sore, my outlook on the holiday newly cynical.

High school was a bust, too. I never got a carnation delivered to me through the stupid Student Council “Cupid” program. Not one. I’d rather not even talk about it. Fuck high school.

College, and pretty much the whole decade that followed, was one big flat line, except for a few cards from my mom. Once, there was a chocolate shaped like a frog and wrapped in green foil, a gift from a cop I briefly dated who eventually cheated on me with a woman who had a barcode tattoo on her neck. I think he gave The Girl With the Barcode Tattoo the same frog, because I saw it on sale at the gas station near his apartment, marked two for five bucks. Nobody buys just one frog at that price, nobody.

My Nashville boyfriend ushered in a brief period of living the Hallmark myth. There were handwritten letters, iPods preloaded with all my favorite songs, reservations at fancy Italian restaurants and individual roses delivered every day, each with a different note. As myths go, it was pretty good. We didn’t last, but he set the bar high. He was a saint, really.

The post-Nashville boyfriend, however, didn’t believe in Valentine’s Day. He had a whole quasi-political stance about it. You’ve heard it before, I’m sure, that thing where a guy rants about his refusal to let a marketing scheme dictate how or when he’s gonna show his love and affection. The truth is, Post-Nashville Guy wasn’t good at showing love and affection on a normal day. He was my Claudius the Cruel.

Two years ago was the low point in a lifetime of bad Valentines. I’d finally met Ed, the man of my dreams, a handsome, soft-spoken rock ‘n’ roller. But for a month and a half before the big day, a string of fights and misunderstandings slowly snowballed into a nuclear meltdown. We broke up at the stroke of midnight on Valentine’s Day. He took the ukulele he bought me back to the music store, and I took the lingerie I bought back to Victoria’s Secret and spent the cash at Cinnabon. Luckily, the breakup didn’t take. We were back together in a few weeks, and it turned out to be a good, healthy, course correction for us. But I still shudder when I think of it.

The memory of that hideous midnight breakup drove me to book a flight to Puerto Rico for the two of us last year. On Valentine’s Day, we were high over the eastern seaboard where no bad juju could reach us, on a plane bound for San Juan. We lazed around on the beach, drank all the piña coladas, smooched in a rainforest and posted obnoxious photos on Facebook. It was so, so good. Perfect, even.

The memory of our San Juan Valentine will have to power both of us through February 14th this year. I’ll be recovering from my 11th round of chemo, after six months of cancer-sponsored utter bullshit: a double mastectomy, a traumatic buzz cut, and week after week of knockdown, drag-out illness. Ed has held my hand for every day of it, but there is nothing romantic about any part of this experience—it’s all agony. There’s only getting through it.

But once we get through it? Watch out. I’m thinking Rome in February 2016. We’ll dance in the streets and pour one out for old Saint Valentine. Cancer and Cruel Claudius can kiss our grits.

QCOLOMBIA – If you send a bouquet of roses for Valentine’s...
Read more