LATIN AMERICA NEWS – (Prensa Latina) About 19,425 people have learned to read and write with the Cuban method “Yo, si puedo” (Yes, I Can) from 2007 to date in Guatemala, the national coordinator of that program, Vilma Monteagudo, stated today. About 20 municipalities were declared free of illiteracy in this Central American country until the end of last year, the doctor in Pedagogical Sciences told Prensa Latina. 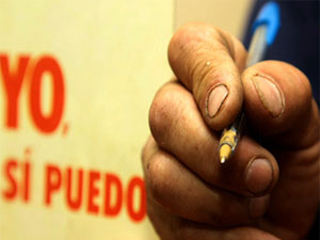 The United Nations Educational, Scientific, and Cultural Organization awarded in 2006 the Cuban method with the King Sejong Literacy Prize, an award that recognizes for a quarter of century the work of governments, governmental bodies, and NGO to promote literacy.

According to figures provided by the source, about 28 Cuban teachers are working in the departments of Santa Rosa, Retalhuleu (eight), Jalapa (one), Escuintla (two), Jutiapa (one), and Guatemala (three).

Since January 2013, the members of the educational brigade, in coordination with the National Literacy Committee, their presence were strengthened in Retalhuleu (eight advisors) and Santa Rosa (13), to declare the 23 municipalities of that demarcation free of literacy.

Today, Thursday, June 17, vehicles with plates ending 7 & 8 CANNOT circulate The measure is countrywide and applied between 5:00 am and 9:00 pm,...
Entertainment