The house where a man, identified by his last name Carpio, suspect in the killing of 15-year-old Jesus Mora, lived was burned down by residents who didn’t want him near them. 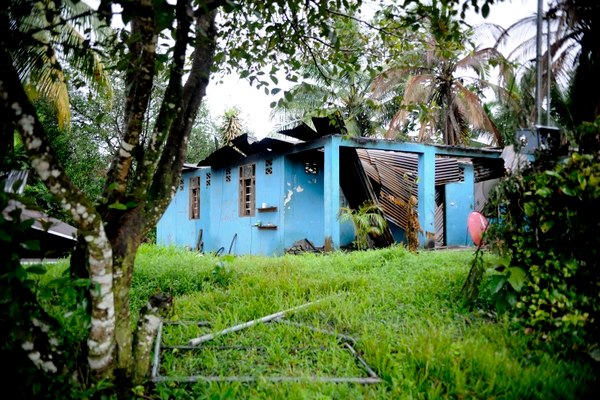 Residents say the suspect lived in an abandoned house owned by a family member, to get high, cook and sleep, in Calles Los Mora, in La Herediana de Siquirres, in the province of Limon.

“We buried my son on Thursday. When we returned, we realized that they had set fire to his house, we did not know who (did it), the neighbors what they are saying is that they do not want to see him anymore,” said Rafael Mora, Jesus’ father.

The concern of Don Rafael and his family, as it appears his neighbors also, is that Carpio will return to inflict more pain and sadness to their community.

“I have to sleep with the light on because I am afraid, Jesus was a boy loved by all, we are afraid that this man will return, he is not crazy because a crazy person does not plan something so cruel,” said a neighbor named Mora.

The neighbors say that they will not lower their guard, although they hope that justice will not forgive this murder and there will be a sentence.

Photo by digitaltravelcouple, "In Puerto Viejo we were located on the...
Read more

QCOSTARICA - For the third consecutive night, the Ruta 32, which...
Read more

Slots are the most popular category in any casino. Gambling websites feature hundreds of these games, simplistic and elaborate. Reel symbols range from cherries...
Vaccine

QCOSTARICA - The landing of two separate and independent shipments of covid-19 vaccines this week, one from Pfizer and the other from Astra Zeneca,...
Coronavirus

TODAY NICARAGUA – A study based on data from the WHO and the University of Oxford placed Nicaragua as one of the “10 safest...
Health

QCOSTARICA - At the press conference from Casa Presidencial that started more than 15 minutes this afternoon, the government announced new sanitary measures that...
Trends

The trading world is full of trading strategies that vary by assets, timeframes, and, of course, technical indicators. In this article, you will learn...
Trends

There’s no one out there that doesn’t love the sense of adventure that comes with exploring a new place. Whether you’re planning a short...
Health

QCOSTARICA - The National Commission for Risk Prevention and Emergency Attention (CNE) has increased alerts for another 7 cantons, bringing the total to 72...