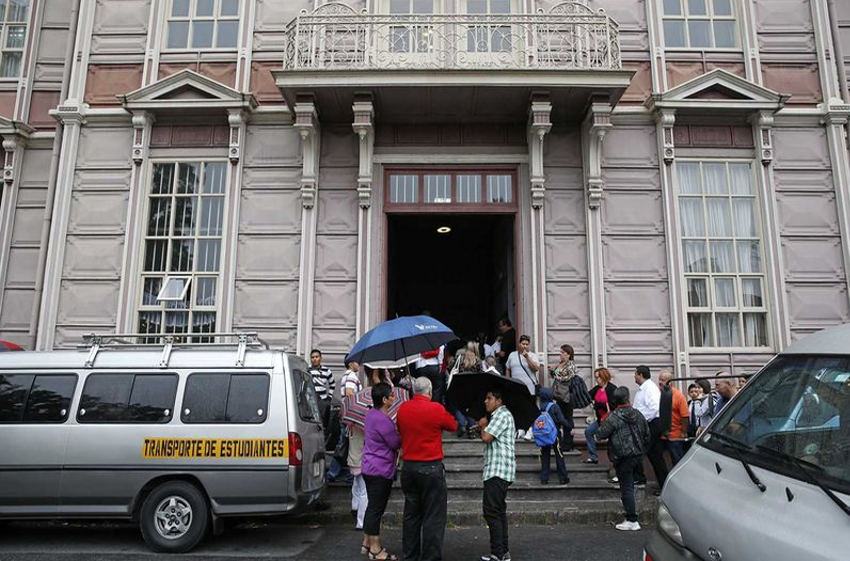 QCOSTARICA – Neither rain nor cold diminished the nervous laughter, tears and emotions experienced by almost one million students on their first day back to school.

For many students and their parents, the start of the 2015 school year was a new adventure.

At the famous “Metal” (Metalica in Spanish) school in the heart of San Jose, many arrived early, waiting for the doors to open.

On the streets in and around schools, the Traffic Police (Policia de Transito) maintained their operations to combat the illegal transportation of students. Before 7:00am, the police body reported having confiscated at least a half dozen license plates from school buses that did not comply with the requirements.

By the end of the day, Mario Calderon, chief of the Policia de Transito, said his officers had confiscated 24 license plates and issued fines to the drivers for ¢103.544 colones each.

Calderon said that some of the items his officers are ensuring is that the vehicles have a seatbelt for each person and an assistant accompanies the driver when transporting students.

For the first day of school, the weather around San Jose was bleak: dark skies in the morning, turning to sunshine by noon and a light to mild rain in the afternoon. Not typical of the summer season.