New coronavirus in Costa Rica: There are 612 infected; minister warns of “bad omen”

Health Minister Daniel Salas expressed his concern about the large number of people who abandoned the stay at home this Monday, indicating that behavior will impact the number of cases

The new coronavirus has spread to 612 people in Costa Rica, according to the report by the Minister of Health on Monday, April 13. That figure means 17 more cases than the day before.

The Minister of Health, Daniel Salas, reported during the mid-day briefing that of the total infections there are 317 are men and 295 women; nationality, 569 are Costa Rican and 43 foreigners. 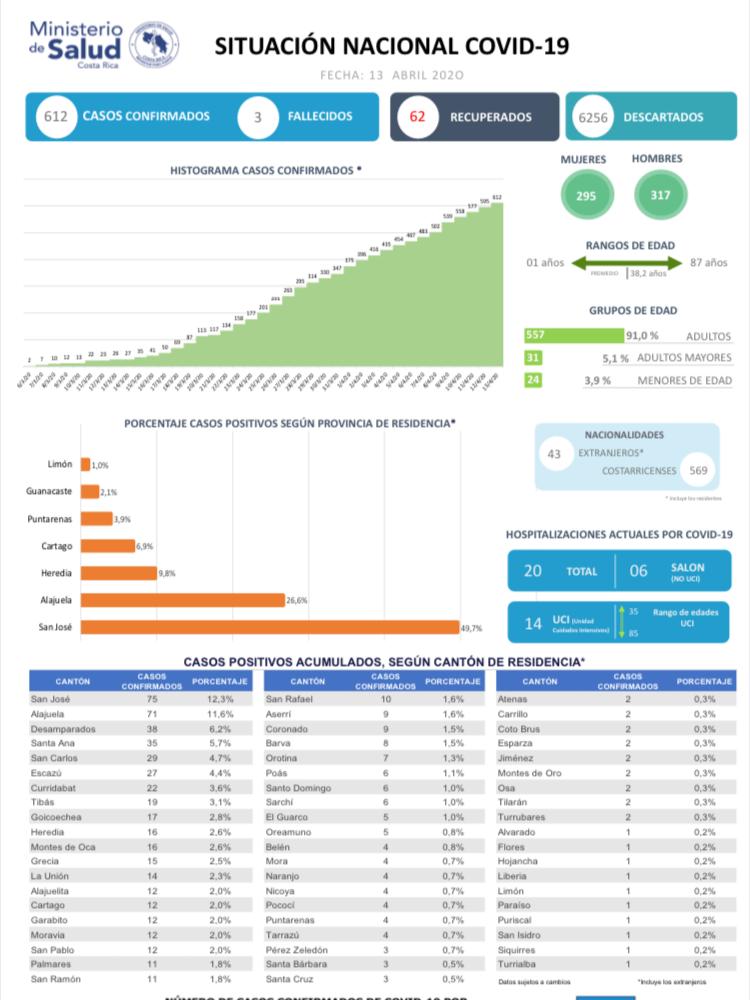 To date, 62 people have fully recovered. That means that they underwent two sequential tests in a span of 24 hours and they were negative, so the virus is no longer in their bodies.

Dr. Salas said that there are currently 20 people currently in hospital, of these, 14 are in intensive care units, their ages range from 35 to 85 years.

To date, three people have died in the country due to the virus.

The minister did not hide his concern on Monday, in fact he appeared unsettled by the reports, photos, and videos of a large number of people in the streets, abandoning their stay at home of Semana Sana, almost as if the emergency was over and done with.

Salas said, “this is a bad omen” because although the situation has been handled well, the behavior on Monday could imply an increase in the number of cases in the coming week.

“Today I want to refer to the evolution of the covid in our country and what has not happened, we are on the verge of happening, and I do not want this to happen, but the behavior we have seen today is a bad omen (.. .). What we are seeing on the streets will have an impact,” he warned.

Salas was emphatic that there can be many people out and about without symptoms (asymptomatic) that could infect others and cause serious cases.

“We have seen people very close together, conglomerations, lines outside the banks, on the street. I know that we were in an Easter that was with a high level of restriction, but the rebound effect leaves us thinking about what can happen in the following days or weeks,” he said.

Salas explained that he insists because his intention is for the country to come out “well from this.”

“I do not want your families, that you, members of the government, are going to go through a scenario so bloody that you can say apocalyptic as Italy, Spain and some States in the U.S. have experienced. This is not the time to relax and think that we can say goodbye to this and that we are leaving it behind,” he said.

Although he did not say specifically that measures will be heightened because of this, he left the impression that if the message doesn’t get through, that is people’s behavior doesn’t change, stronger measures could be put forth.

Unrelated to the Minister’s comments, later in the afternoon, the Ministry of Health shuttered at least one branch of the Banco de Costa Rica (BCR) and issued warnings to a couple of others for having too many people inside the branches. The health orders for banks, businesses that attend the public directly. including supermarkets and pharmacies, is that capacity is limited to 50% of their sanitary permits.

In this regard, Román Macaya, executive president of the Costa Rican Social Security Fund (CCSS), was even more vehement in his final message and referred to the body bags whose purchase was announced last week.

“We have seen soccer games, bbq’s, swimming pools in the alamedas (passageways) in communities such as León XIII, Pavas, La Carpio, Alajuela and Heredia, and others. It is a serious issue, the intention is to protect everyone and this could affect other people,” he said.

Despite the strong message, the tough sanctions, thousands are still violating the vehicle restrictions. 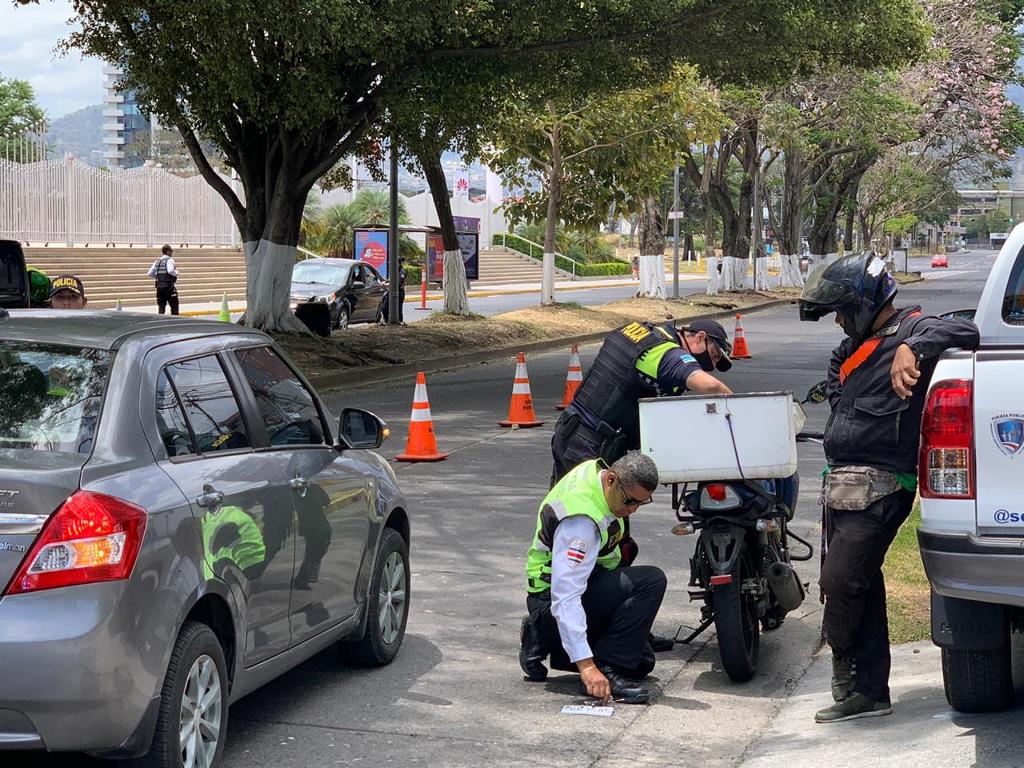 Up to Monday, the Policia de Transito has reported issuing more than 8,400 tickets to drivers for breaching the vehicular restrictions. 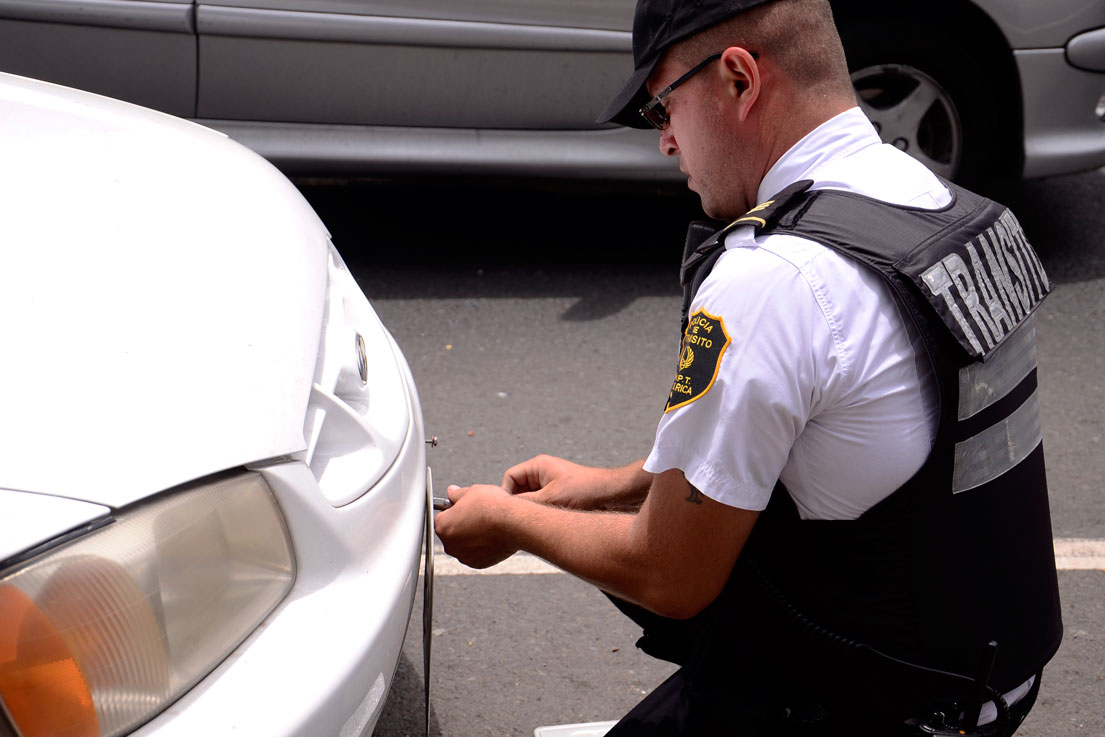 Prior to Semana Santa, the fine for a violation was ¢23,000 colones. On Saturday, April 4, the new fine of ¢110,000 colones, six points on the driver’s license and the confiscation of plates and/or vehicle went into force. Yet…

Security Minister Micheal Soto reiterated the added efforts to control the borders of illegal crossings, at both, the south with Panama and to the north with Nicaragua, with emphasis on the latter.

Additional manpower has been deployed along the northern border to detect illegal crossings through “blind spots”, supported by air surveillance, police in boats, on foot and roadblocks, in a coordinated effort between the Fuerza Publica, immigration police, border police, air surveillance and other police forces.

QCOSTARICA - Have your umbrella at the ready this...
Tech

With Instagram, you have the opportunity to get ahead...