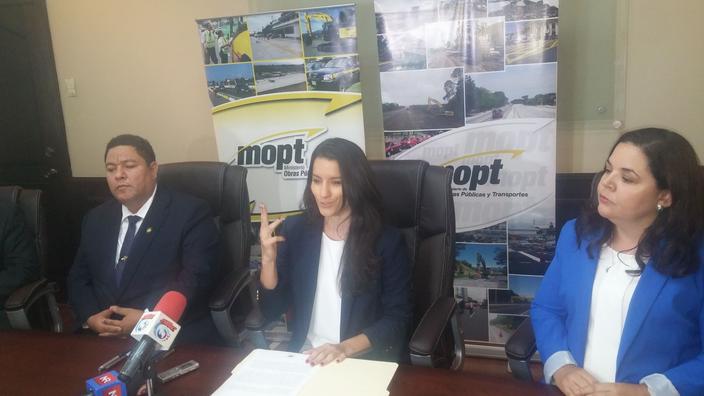 Liza Castillo Vásquez is the new deputy minister of Teansportes y Seguridad Vial, sworn in by President Luis Guillermo Solis this past Tuesday. But, will Castillo last long in her post? Our prediction is most likely not.

Castillo is expected to continue work of Sebastian Urbina, who was removed from his post weeks ago for conflicts with the public transport sector, mainly the bus operators.

One of the main projects of Transport is to continue with the “sectorization” and the use of electronic billing in public transport.

Castillo comes in at a time the transport sector is battling reforms and the arrival of ride sharing companies such as Uber. The Transport ministry is also under the gun to resolve the growing traffic congestion nightmare that has gripped the Greater Metropolitan Area (GAM).

Castillo, an architect by profession and with six years experience in the planning and coordination of the reorganization of public transport proposals, is expected to promote the public transport to be more sustainable and inclusive.

But, within days of her appointment, the transport sector is calling for her destitution.

The first accusation volleyed her way was over her relationship with the bus operators.

According to the trade union, the National Association of Public and Private Employees (ANEP), Castillo’s appointment was to the government was for appeasing the interest of the “corporate entrepreneurship of bus operators”.

The union said Castillo has devoted her last six years in advising several public transport companies and until last week (prior to her appointment as deputy minister), was the project advisor for the Sistema Integrado de Transportes del Este (SITE), the consortium that holds the bus route concessions for Tres Rios, San Pedro and Curridabat.

For the union, the arrival of Castillo deepens the “helplessness” of bus users. Bus operators are now in the midst of a “blackmail” campaign against the Autoridad Reguladora de los Servicios Públicos (Aresep) wanting to apply a new tariff model that will lower bus fares.

On Thursday, the Minister of Transport and Public Works(MOPT), Carlos Villalta, ruled out the departure of the new deputy minister.

On the charges of being on the side of the bus operators, most specifically attending meeting held last March by former deput minister Urbina, to which Castillo was present, she says she was “only there to take minutes of the meeting”.

“Mrs. Castillo was acting virtually as executive assistant to the said business sector,” said the ANEP on Thursday.

Defending his new deputy minister, Villalta said, “I honestly think will not proceed with the resignation, Liza’s participation (in the March meeting) was not relevant, nor a driving issue with competing projects.”

But, on Friday, an even stronger public transport group, the taxi drivers,  joined in to demand the removal of Castillo.

The taxi drivers are coming from a different angle, accusing the new deputy minister as being a Uber customer.

According to Ruben Vargas, president of the Unión de Taxistas Costarricenses (UTC) – Taxi Union), the group has infiltrated Uber and assure to have evidence that Liza Castillo is a user of the ride sharing service, which is in continuing conflict with the Ministry of Transport over its legality in the country.

“We went from ‘bad’ with Urbina to ‘worse’ with this lady. It leaves us thinking in whose pockets is the deputy minister of transport in,” said Vargas.

Thus, the deputy minister is one more enemy to the list of the taxi drivers union. “We can not have a person of such high rank within the MOPT and which has been or is a user of illegal transport,” says the Union.

According to the UTC, eventually, Castillo will have to testify when the Administrative Court calls it first hearings in the administrative proceedings the tax union has filed against the government, a process that, according to Vargas, could begin in a month.