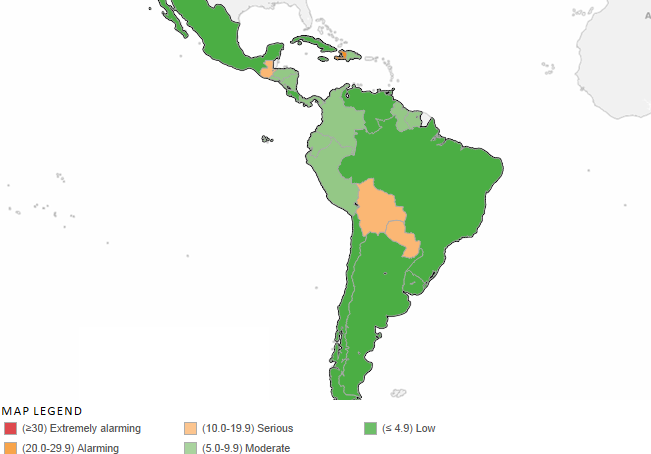 (PANAMPOST) Hunger levels are low in Latin America and the Caribbean, according to the Global Hunger Index 2013 (GHI). However, not all countries in the region receive a good score: Guatemala, Bolivia, and Paraguay have “serious hunger problems,” while the population in Haiti have an “alarming” level of hunger. (See the report below.)

The research from the International Food Policy Research Institute (IFPRI), together with Concern Worldwide and Welthungerhilfe (based in Germany) NGOs, analyzes hunger in 120 countries. The authors do not to include “industrialized” countries. Of those measured, though, the index classifies them into the following categories: extremely alarming, alarming, serious, moderate, and low.

While the underlying data may suffer from doubts about accuracy, the GHI combines three reported national indicators to score each country: the proportion of undernourished people as a percentage of the population, the proportion of children under five who are underweight, and the under-five mortality rate.

In the world, three countries have an extremely alarming score: Burundi, Comoros, and Eritrea. Sixteen countries are alarming; 37 are serious; 22 are moderate; and 42 are low.

Argentina, Brazil, Chile, Costa Rica, Cuba, México, Uruguay, and Venezuela are the Latin American countries with best performance in the index; all have an under-five score or “low” prevalence. (See the key in the diagram.) That compares to Burundi’s significantly lower score — the East African country has the worst rating overall — at 38.8.

Nicaragua — alongside Ecuador, the Dominican Republic, El Salvador, and Colombia — is in the “moderate” group. However, its rate of malnourishment is still high compared with the rest of the region. That is 20.1 percent, followed in the moderate group by Ecuador, 18.3 percent; the Domican Republic, 15.4 percent, Colombia, 12.6 percent; and El Salvador, 12.3 percent.

The report also indicates which countries were more effective at lowering hunger between 1990 and 2013, and which countries worsened. Nicaragua, Perú, Venezuela, México, and Cuba are the Latin American countries that improved the most according to the index. Paraguay and Guatemala, on the other hand, worsened. Paraguay’s rate of hunger, in particular, has risen in a stark manner since in 2005, when it ranked as moderate.

“2.6 billion people have to live on less than two dollars a day. For them a sick family member, a single drought or the job loss of someone working abroad is a major crisis. As a consequence a child can no longer afford to go to school, the family diet is reduced to often one meal a day or livestock needs to be sold. These people have simply no coping mechanisms left to react to a crisis.”

Although the level of undernourished population has decreased since 1990, there is still work to do before achieving the long-term goal of zero hunger, she added.

Nowadays, around 870 million individuals (1 out of 8 in the world) suffer hunger — and almost one third of food is discarded. The Global Hunger Index recommends charitable, organizational work with affected communities to strengthen their abilities to resist natural events and fight against hunger.

The report also recommends that political leaders in each country develop a national strategy with the aim of guaranteeing food and nutrition security, particularly during a crisis. Meanwhile, they also suggest that humanitarian workers focus on maternal and child nutrition along developing regions, and that interventions address both the immediate and underlying causes of malnutrition.

Following the series of accusations and backlash levelled against...
Investing In Costa Rica