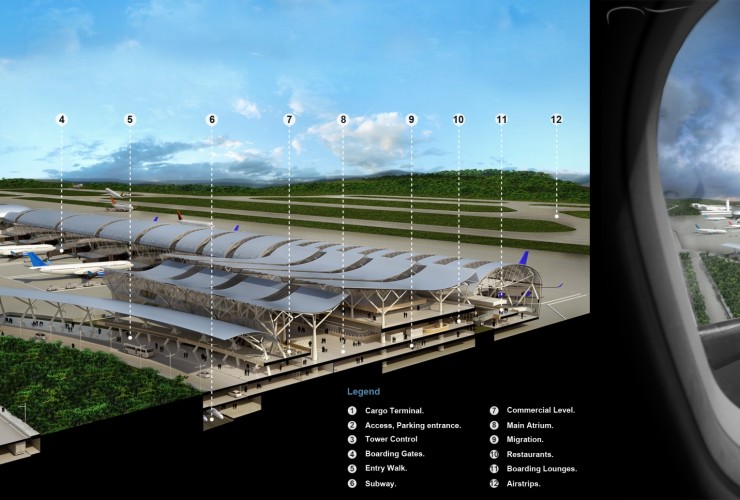 COSTA RICA BUSINESS NEWS – Previously slated to begin construction in 2025, the new international airport at Orotina, Alajuela is seven years ahead of schedule, with construction on the new Costa Rica airport to begin in 2018.

While the original plan for the new mega airport in Costa Rica was to begin construction upon the conclusion of the contract at Juan Santamaria International Airport, a recent surge in tourism in Costa Rica has given the country a pressing need for a larger facility that can accommodate larger aircraft with more gates.

As a positive indicator for Costa Rica real estate development, this new international airport is anticipated to spark a second real estate boom in the next decade.

The tourism boom is spilling over into the Costa Rica real estate market at an exponential rate and the need for greater international access and improved infrastructure has sparked the early construction of the new international airport in Costa Rica.

Since Costa Rica is already the leader in tourism and real estate in Central America, the new Orotina International Airport is expected to move real estate development in Costa Rica even more to the forefront of international investment markets world-wide.

The new international airport in Costa Rica is to be constructed in the region of Orotina, near the Pacific Coast of the country. The concept is to construct a Central American Mega Worldport that would connect “the heart” of Latin America with the U.S., Canada, Europe and Asia.

The Orotina International Airport will double in size in comparison to Juan Santamaria. It will have two runways and a super terminal to accommodate larger airliners including the Airbus A-380s, A-350s and Boeing’s 747-800s, 777s and the 787s Dreamliners.

Upon completion of the new international airport in Costa Rica, Juan Santamaria International Airport will be used as a regional airport for Central American flights, charters and executive airplanes.

With the potential to triple international access to the country by 2025, the new Orotina International Airport will make Costa Rica land development and real estate the hottest commodity in all of Central and Latin America.

HQ - The appearance of pests and diseases, in particular the 'dragón amarillo' (yellow dragon), the impact of the weather and a sharp drop...
Environment