New Street Signs Are Popping Up In San José 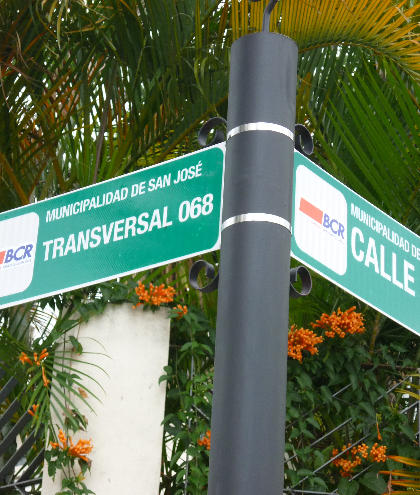 New street signs have been popping up all over San José. The signs, with sponsor messages, are being erected on major streets and intersections.

The placement of the streets signs will simplify navigating the city.  But maybe not.

Once upon a time there were street signs in the country’s largest and most populated city. Evidence of the elusive signs – now faded for the most part – are on some buildings in the downtown core. You really have to make an effort to see them. And in communities like Rohrmoser most streets have rusted out street signs.

The new signs have a fresh look. They are clean and appealing. But, will they actually serve a purpose? Or go the way of the old signs?

For new visitors the new signs could be a big help. That is if the maps of San José are updated. It is very difficult to get a good map of San José. Or at least a current one. But that is for another story.

I will venture that for most Costa Ricans and expats living in the country for years, the new signs will be nothing more that decoration.

And confusing. A case in point.

Everyone knows the “Rohrmoser Boulevard”. The Bulevar (in Spanish) his is the road that runs from the Stadium to the (almost) Pavas airport. It is also well known for wide two lanes and the large trees in the middle that span the several kilometres.

It is also the street with the home of Nobel Peace prize winner and two time Costa Rica president, Oscar Arias

But, according to the new street signs the street is really called “TRANSVERSAL 068 ‘. Uh? Transversal what? 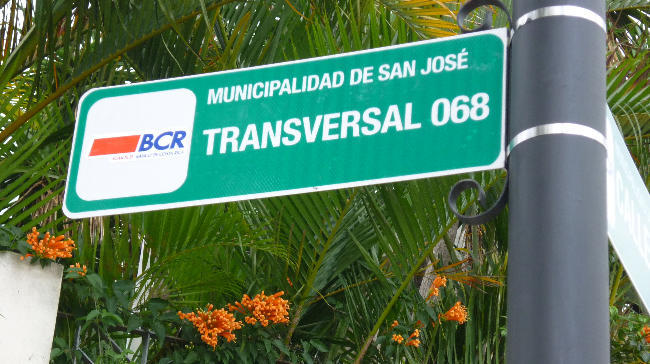 I will stick to the Bulevar. And will continue to use Oscar’s house as a reference point.