QCOSTARICA – The intersection east of the San Jose airport has been a nightmare of years for drivers of the Alajuela – San Jose direction and the scene of numerous spectacular accidents of the autopista, the main road into San Jose

In its first day of operation, Wednesday, the traffic congestion was beyond description. The backlog of traffic was all the way to Dos Pinos, a few kilometres from the intersection.

This morning, Thursday, at 6:00am, the congestion was no better. The backlog reached Villa Bonita and according to Waze, traffic on the autopista and the radial de Alajuela (the road from Alajuela to the autopista) was moving at top speed of 8 km/h (5 mph). 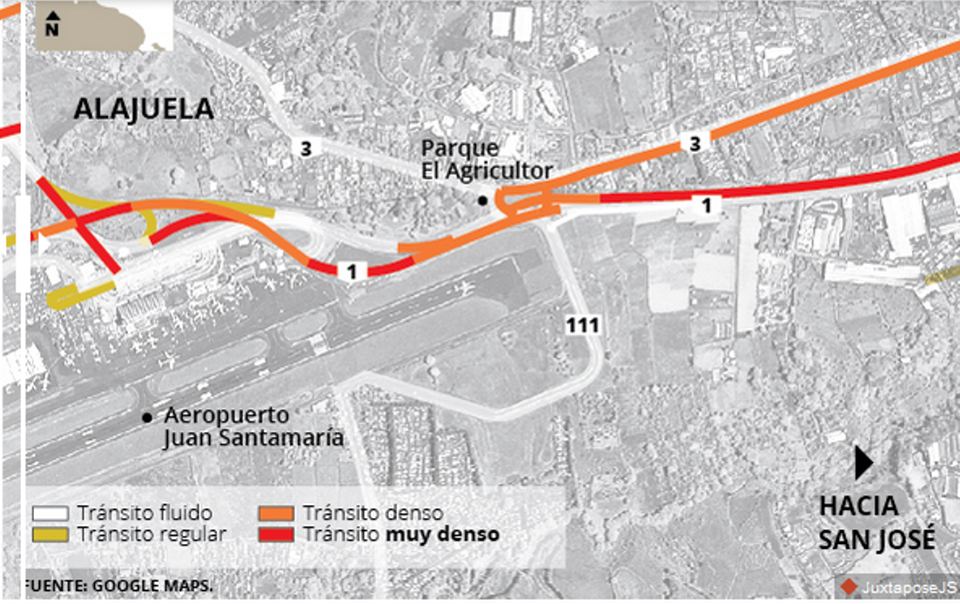 The Ministerio de Obras Públicas y Transportes (MOPT) says the traffic lights were installed to prevent more traffic accidents and will be evaluated during the next 15 days, to determine the impact on traffic in the area.

That means that in the meantime, and although the traffic police will be monitoring the situation and will be on hand to alleviate congestion, the nightmare continues on this road with volume of more than 100,000 vehicles daily – an average of more than 4,000 vehicles per hour.

For some the alternative could be to Ruta 27, a road that has its own challenges from the La Guacima tolls to the Circunvalacion, in the San Jose direction in the morning and the Alajuela direction in the afternoon.

Many of the drivers interviewed by the media had a common sentiment, “it’s no secret that the area needs an overhead bypass”.

Recommended is to avoid the intersection especially in the mornings and all together if possible.

- Advertisement -
Paying the bills
Previous articleSenseless Deaths: Mother And Infant Struck While Trying To Cross Autopista General Cañas
Next articleWhy There is No Q This Week. Well Kind Of.

The last straw: access road to Barreal de Heredia is delayed because they forgot the sidewalks