TODAY NICARAGUA NEWS – At least five people were killed and more than 20 injured on Sunday in Nicaragua after the celebration of the 35th anniversary of the Sandinista Revolution in Plaza Juan Pablo II in Managua province. 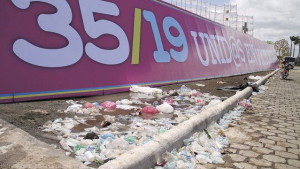 Local press reported that the attacks occurred in two places in Matagalpa, with the first taking place along Pan-American highway and the second in San Ramon community.

In a public statement before local press, Sadrach Zeledon, Political Secretary of Sandinista National Liberation Front in Matagalpa, condemned “the massacres made by hateful, unscrupulous and criminal people.”

According to Zeledon, the attacks were conducted by heavily- armed men who shot against the buses where the Sandinista followers traveled to return home.

“We have a deep indignation and we feel powerless before this coward and criminal attack, a total massacre. It was a merciless ambush against poor people who celebrated our Revolution with joy and hope and in a peaceful environment,” said Zeledon.

QCOSTARICA - In times of pandemic, things change constantly, especially when it is necessary to tighten the belt to reduce the contagion of covid-19. The...
Trends