Despite the risk, to thousands of drivers daily, only a yellow tape placed on the Forum bridge over route 27 after a driver crashed through the guardrail and fell to the road below. Globalvia and the MOPT say it is not their responsibility. 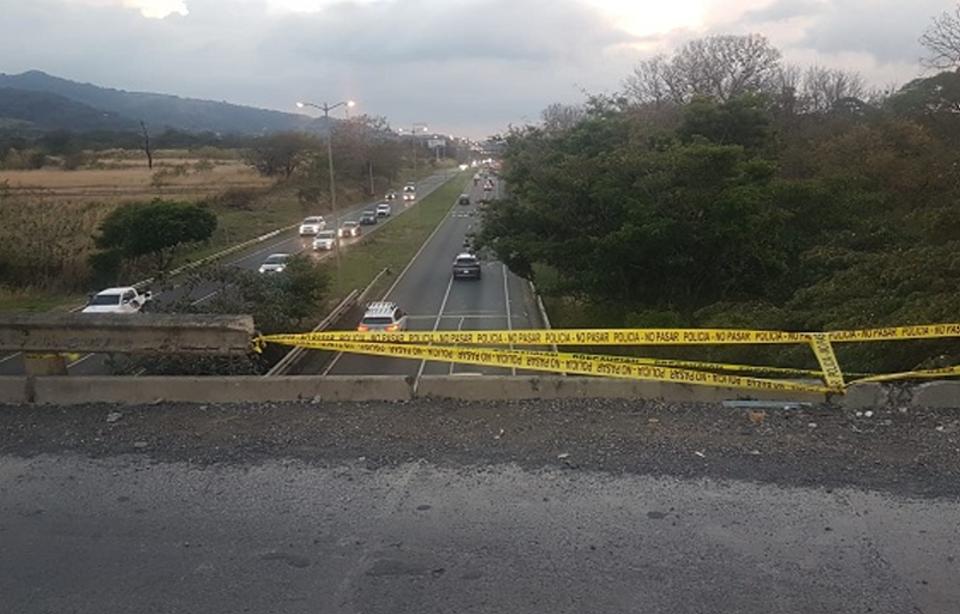 QCOSTARICA – The bridge located on the Ruta 27 in the area of the Forum de Santa Ana continues to represent a danger to the thousands of drivers who circulate that road daily after a driver lost control of his vehicle, broke through the flimsy guardrail, falling to the road below.

More than a week later a yellow tape warns drivers of the missing guardrail.

At that time, the representatives of the concessionaire of the Ruta 27, Globalvía, said that the repair of the bridge was the responsibility of the Ministerio de Obras Publicas y Transportes (MOPT).

For their part, the Consejo Nacional de Vialidad (Conavi) – National Highway Council – a department of the MOPT, says the repair to the bridge is not within their responsibility.

“With respect to the situation that arose in the bridge located by Forum, this bridge is not located on the national route, therefore it cannot be attended by the Conservation Management.

Read more: Ruta 27: No one hurt after car falls off bridge lands on road below

“For this, the Management is making a detailed report where it explains and informs that this bridge is within a private land and cannot be intervened by the Management of Conservation of Roads and Bridges of Conavi,” said the entity’s spokesperson, Adriana Castillo, one week later after being pressed to provide answers on the situation.

Castillo added that the structure was “built years ago with permits granted by Traffic Engineering” and that they are not responsible for the damage or repairs, despite being used by thousands of drivers every day.

And despite being subject to controls (signs) prohibiting large vehicles on the bridge, largely ignored by drivers.

So, if the bridge is not part of the national route 27, it is not the responsibility of the MOPT, nor that of Globalvia, who is responsible?

Attempts to contact the administrative representatives of Forum 1, the company alleged to have built the bridge to provide access to the development, to find out if they would assume any responsibility for the repair of the bridge did not have positive results.

By telephone, the company indicated that there was no one in change that could refer to the situation.

QCOSTARICA - What will happen to the expansion of Ruta 27...
Read more