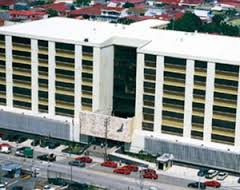 The Tribunales de Goicoechea (San José criminal court) has court released a 62-year-old Limón criminal court judge accused of accepting a ¢20 million colon bribe to set a narcotics trafficker free on bail – only to have him flee from justice. Rosa Elena Gamboa was given the usual restrictions – not to leave the country and to sign in with the court every two weeks.

Ironically, the bail conditions is the same she set for many suspected criminals before her as a judge, and the same condition she set in 2011 for the alleged drug trafficker free in exchange for payment, who today is still at large from justice.

Judge Gamboa has worked with the Poder Judicial (Judiciary) for the past 13 years and at one time headed Limon’s criminal court. She was arrested Friday at her home in the port city of Limón.

Judges, in deciding is a suspect deems release on bail consider if there is flight risk and take into account the past criminal record. However, it appears from past cases that the severity of the crime is not a major consideration.

Earlier this week, the Supreme Court decided to launch an investigation into the penetration of organized crime and drug trafficking in Costa Rica’s Judiciary