The traffic officials (policias de Tránsito) are on the wrong side of the law today, after being arrested yesterday by the Organismo de Investigación Judicial (OIJ), suspected of charging drivers a bribe. 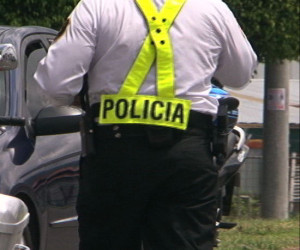 The detained were identified (by their last names) as: Solano, Loría and Vargas.

The three face from two to eights years in prison if convicted.

The OIJ report says the officials would demand cash payments from offending drivers in exchange not to write them a ticket. The “chorizo”, as a bribe is known in Costa Rica, was up to ¢40.000 colones. The amount in each case, says the report, depended on the statutory fine for the offences, which could be up to ten times the bribe.

The three were arrested on duty, one on the Ruta 27, the other two in Paso Ancho.

The OIJ report indicates that the suspected official on the Ruta 27 tried to flee on spotting OIJ officials coming towards him.

Last month, two other Tránsitos were detained for corruption, bringing the total so far this year to five.

QCOSTARICA - A sad discovery occurred this Thursday morning in a hotel located in La Sabana, in San José, the lifeless body of a...
Infrastructure