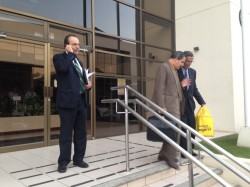 Planning Minister, Roberto Gallardo, confirmed on Monday that the government has “officially” notified the Brazilian company, OAS, the cancellation of the concession contract.

Gallardo said that a letter by the Consejo Nacional de Concesiones detailed the reasons for the cancellation.

The Minister added that, through public tender, a company will be hired to calculate the payment of expenses incurred by OAS, an amount estimated at US$34 million dollars, which could be more based on the findings of the audit firm.

In cancelling the controversioal concession contract of the San José – San Ramón cotract, Presidenta Laura Chinchilla said on national television on April 22, the cancellation would not cost Costa Ricans. She did, however, explain that the company will be compensated for costs incurred in the process.

- Advertisement -
Paying the bills
Previous articleHot, Muggy Weather To Continue All Week
Next articleNext Week For Train To Cartago