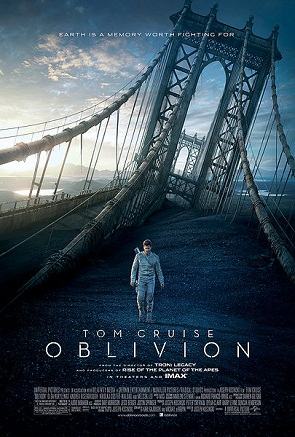 The film was initially scheduled to release on July 10, 2013. Since the 3D re-release of Jurassic Park was set for a July 19, 2013 release date, the US release date was moved forward to April 19, 2013.[10] According to Kosinski, Oblivion pays homage to science fiction films of the 1970s

Plot Summary
In the year 2070, Jack Harper (Tom Cruise), lives in a futuristic house above the clouds, with his assigned partner, Victoria/Vika (Andrea Riseborough).

They are the last people left on Earth after it was destroyed by aliens known as the ‘Scavs’, who wanted Earth’s resources.
They had destroyed the moon, which lead to a series of natural disasters until the humans declared war on them. In the end, the humans won, but had lost the Earth. The entire human population have moved to a large spaceship called the Tet, ready to go to Titan, Saturn’s moon.

Part of a massive operation to extract vital resources after decades of war with a terrifying threat known as the Scavs, Jack’s mission is nearly complete. Living in and patrolling the skies from thousands of feet above, his existence is brought crashing down when he rescues a stranger from a downed spacecraft.

Her arrival triggers a chain of events that forces him to question everything he knows and puts the fate of humanity in his hands.
See it at:

But, don’t take our word for it, see it for yourself at: