[BLOG] October Is The Month of Rain. And Lots of It! 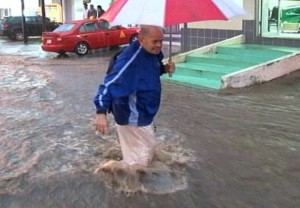 Best be prepared, it is October 1 and this is the worst month of the rainy season, more rain falling on us this month than in any other month of the year.

Besides the obvious, what this also means lots of flooding, partly due to the volume of rainfall, but also to the clogged storm drains, creeks and rivers, that are used by many as their personal garbage bins.

Experts urge us to keep a constant eye on weather conditions and the water levels of rivers and creeks, and to take special preventive measures in areas prone to flooding.

As for road safety, slow down, turn on the emergency or 4-way flashers to let other drivers know you are going slow. Be extremely careful with pools of water. No matter how low it may seem on the surface it could be hiding a giant hole and/or clogged storm drain with a MISSING MANHOLE COVER. Using headlights while driving improves your being visible to other drivers.

An umbrella and waterproof shoes are recommended.

Keep an eye in the sky. As a general rule of thumb, if the dark clouds are coming from the East or South it means normal, heavy rain. If from the North or West, prepare for some intense storm that will probably include lighting.  High winds that have the ability to raise roofs are also possible during these storms.

The intensity of the storms will also depend on the morning. A bright, sunny and hot morning will bring feirce weather in the afternoon. An overcast morning means the rains are less intense.