One Of The Baileys On The Circunvalación Converted For Pedestrians 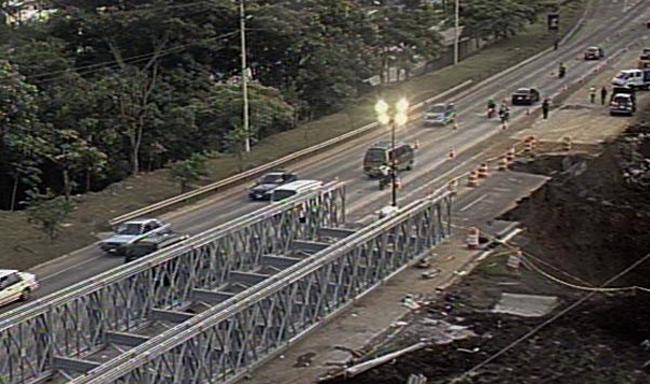 The collapse of the Circunvalación not only affected the more than 50.000 vehicles that used the ring road daily, but also the many who daily walked between the Hatillos and Pavas and surrounding areas, mainly to get to and from work.

While we see the congestion of the vehicles, the cameras don’t pick up the images of the many who work in the posh neighbourhoods of La Sabana, Rohrmoser and Escazú, who could not walk to and from the working class area of the Hatillos.

They prefer to walk, some bike it, rather than take the bus. They can’t afford a taxi.

Walking is not only healthy and economical, but in most cases faster than taking a bus which means travelling to downtown San José and then another bus back to their destination, which in most cases is within less than a kilometre of their home, across the Maria Aguilar river. They walk along the side of the Circunvalación where there is no sidewalk and traffic moving at excessive speeds.

With the closure of the Circunvalación this group found themselves cut off, facing a walk now of several kilometres and up the steep hill of the Calle Morenos.  A  2o to 30 minute daily walk was an hour or more.

For this the Ministry of Transport was obligated to maintain one of the four Bailey bridges constructed on the Circunvalación open and converted for pedestrian traffic.

Transport officials assure that the “modified” bridge is safe to cross on foot or bicycle.

Officials of the Conavi and the MOPT say that despite the constant rains of the last several days work on the site continues. Mauricio Sojo, the engineer in charge of the work, assures that the Circunvalación will be open to vehicular traffic in the two month time frame promised.