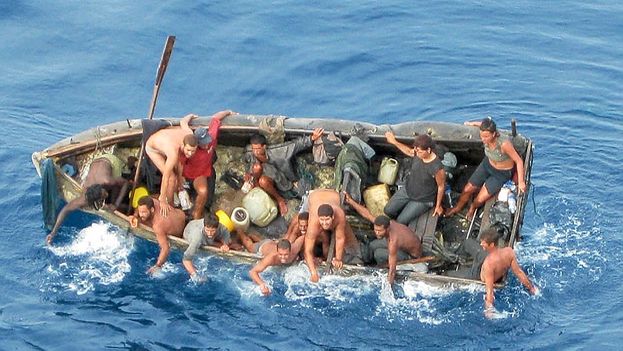 QCOSTARICA from the Babalú Blog –  Over 25,000 Cubans entered the U.S. through the Texas border during the first seven months of 2015.

Finding out how many have entered through California, Arizona, and New Mexico is extremely difficult.

Now we learn that 1,000 U.S-bound Cubans are stuck in Costa Rica.  No one seems to have counted how many more are stuck in other Central and South American countries,or how many are flowing in, headed for the U.S.

Ah!   Call ’em DFWW’s (Dry-foot wetback wannabes).  Why does no one seem to be paying attention to this side effect of “normalization”?

About 1,000 desperate Cubans on an exhausting odyssey through South and Central America to the United States are stuck in Costa Rica with many risking deportation, authorities and the migrants said Thursday.

Many of them are too broke to pay farther passage north, having exhausted their funds by flying from Cuba to Ecuador then traveling overland through Colombia, then paying bribes to go by small boast to Panama and then over the land border into Costa Rica.

More than 100 of them are staying in streets close to Costa Rica’s migration office in the capital San Jose, and nearly 1,000 are stuck in a border town unable to pass through passport control because they don’t have a visa.

America has a longstanding policy of accepting Cubans who set foot on its soil.

In an effort to get past the US Coast Guard, which would return them to Cuba if caught on water, many now try to enter via Central America and then Mexico — the same route used by mainland Latino migrants.

But increased security along the southern US border and boosted vigilance in Mexico have made that passage more difficult.

Images by Costa Rican television news channel Telenoticias showed the Cubans in the southern Costa Rican border town of Paso Canoas demonstrating to ask they be permitted to continue their journey.

“We are chasing our dreams,” read one placard held by a Cuban.

Another, Rosalis Taguada, told the channel that “we have risked our lives to make it to Costa Rica — it’s difficult for a mother to subject her daughter to this, but it is more difficult to remain in that country (Cuba).”

The head of Costa Rica’s Migration Service, Kathya Rodriguez, told reporters that the Cubans already in San Jose could soon be taken north, to the border with Nicaragua, if their papers were in order.

But those on the southern border with Panama would be sent back to that country if they were deemed to have crossed over illegally.

“In that case, we will conduct the process directly with Panama because it’s obvious these people entered from Panama,” she said.

“I don’t know what sort of migration processing Panama is doing” with the Cubans, she added.

This week, Costa Rican police busted a migrant-smuggling ring that worked to take unauthorized migrants, mainly Cubans, through the country to the Nicaraguan border.