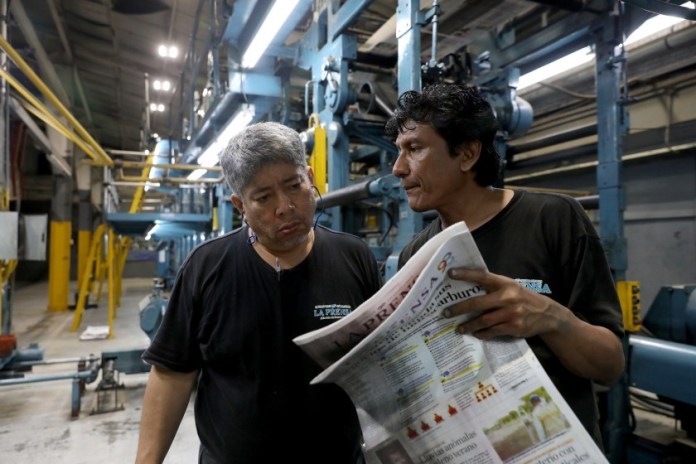 The government of Daniel Ortega earlier this month lifted the blockade of paper and ink, which has held illegally in the warehouses of the General Directorate of Customs (DGA) for more than a year, that was preventing Nicaragua’s oldest and most renowned newspaper, La Prensa, from normal publishing.

The paper went more than 500 days without the necessary supplies to print.

To continue working, La Prensa had to first shrink their editions from 32 to eight pages and later use a more expensive kind of paper. They also cut staff and limited distribution.

In a statement, La Prensa said that goverments authorities agreed to unlock paper and supplies, in response to the efforts of the apostolic nuncio in Nicaragua, Monsignor Waldemar Stanislaw Sommertag.

The paper’s director, Jaime Chamorro, said, “if La Prensa had been closed down, [Nicaragua] would have been the first country in the world without a print newspaper.”

The Customs Department has retained 92 tons of newsprint, 49 tons of printing paper, plates, rubber, developer for press, belts, inks, spare parts, which had entered the country through ten shipments.

The inability to access to newsprint, ink and other supplies forced the El Nuevo Diario to suspend operations last September .

Since the protests of April 2018, press freedom in Nicaragua has dramatically deteriorated. It is now considered one of the most dangerous countries for journalists.

- Advertisement -
Paying the bills
Previous articleCoronavirus forces Costa Rica Cyclist Andrey Amador and other members of the cycling group to isolate themselves in a hotel
Next articleCoronavirus: Nicaragua has not established protocol or will quarantine

QCOSTARICA - A study by the firm Kantar revealed...