Oscar Arias Is Sitting This One Out 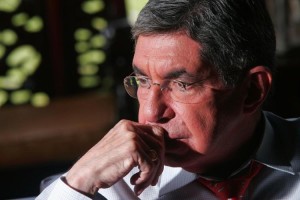 Former president, Oscar Arias Sanchez, is sitting out the 2014 presidential elections. In fact, he told La Nacion in an interview, that he will maintain his silence and limit his participation only to go out and vote on February 2.

Arias has refused interviews on the political campaign, giving his standard answer, “no comment”.

“I will just cast my vote on election day”, the former president told La Nacion.

However, PLN candidate Johnny Araya is positive of the possibility of Arias joining his campaign, as did two former presidents, José María Figueres and his uncle, Luis Alberto Monge.

Last week Araya told La Nacion that he has had telephone conversations with Arias, but no date has been set for a meeting.

Arias and Araya are neighbours, living within a few blocks of each other in the posh neighbourhood of Rohrmoser. But their political differences make for a big fence between the two.

Arias, who governed for two terms (1986-1990 and 2006-2010) has remained distant from the electoral process since his brother Rodrigo Arias bowed out of the race last year, on January 4, 2013, paving the way for a Araya candidature, a favourite in the polls.